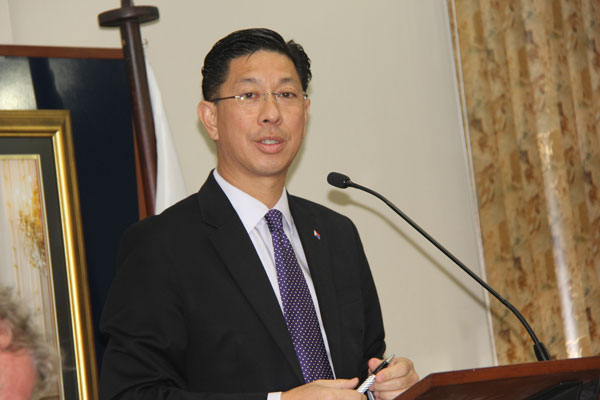 PHILIPSBURG:--- Minister of Health, Labor and Social Affairs Emil Lee told reporters on Wednesday that he busy working on empowering the staff members working for the Ministry of VSA. The Minister Lee said he gave the departments some space to do what they need to do without his full presence. He said they do brainstorm and meet regularly but the departments of VSA got some free space to execute their duties.

Minister Lee further explained that the department has been busy fighting the breeding of mosquitoes in order to curtail the Zika virus. A meeting he said was held on Wednesday between the French and Dutch authorities aimed at exchanging information on how to deal with the Zika epidemic.
Another step CPS has taken is they are sending out letters, lawyers, banks, real estates, notaries informing them that they have to take the necessary precautions to ensure that the properties that they are managing do not have breeding grounds for mosquitoes. Minister Lee said a resident contacted him via Facebook and informed of derelict building next to her home that is a breeding ground for mosquitos. The Minister said persons also contacted him informing that some other areas such as Sucker Garden but that he said poses some problems since no specific area or buildings were identified. He further stated that the Ministry have been in contact with the hardware stores for them to stock up on mosquito repellents.
As for the dispute taking place at Stars casino and some of its employees Minister Lee said those employees have approached the labor department for advice and the department is busy working on the case in order to come to an agreement with the employer.
Minister Lee confirmed when asked by SMN News if the labor department is up to par when it comes to storing of data and if there is an unemployment registry at the Labor Department. Minister Lee said when he took office the first thing he found out was that data from the Labor Department got lost in July 2014 due to power outages and there were no back up of that information. He said ever since then he ordered the staff of the labor department to back up all information.
When asked how efficient is the labor department when it comes to representing employees? The Minister said that he do not get into individual cases, but he does know that the department is on top of their jobs even though short staffed.
Bidding process open for Turn Key Hospital. (SMMC Development)
The Minister said that the Ministry had issued a terms of reference for engineering companies to develop a bidding process for a Turn Key Hospital. Minister Lee said three local companies were approached that are partnering with larger construction firms overseas. The Minister said that the bidding should be completed by February 19th. The Minister of Health they are already looking for developers that are specialized in building Turn Key hospitals who will be charged with designing, building and maintaining of the institution. Another request will be that the Ministry will see if these firms will providing financing. He said that he was very pleased with the statements made by Minister Plasterk who said that the Kingdom will be willing to provide financing if the CFT approves the project.