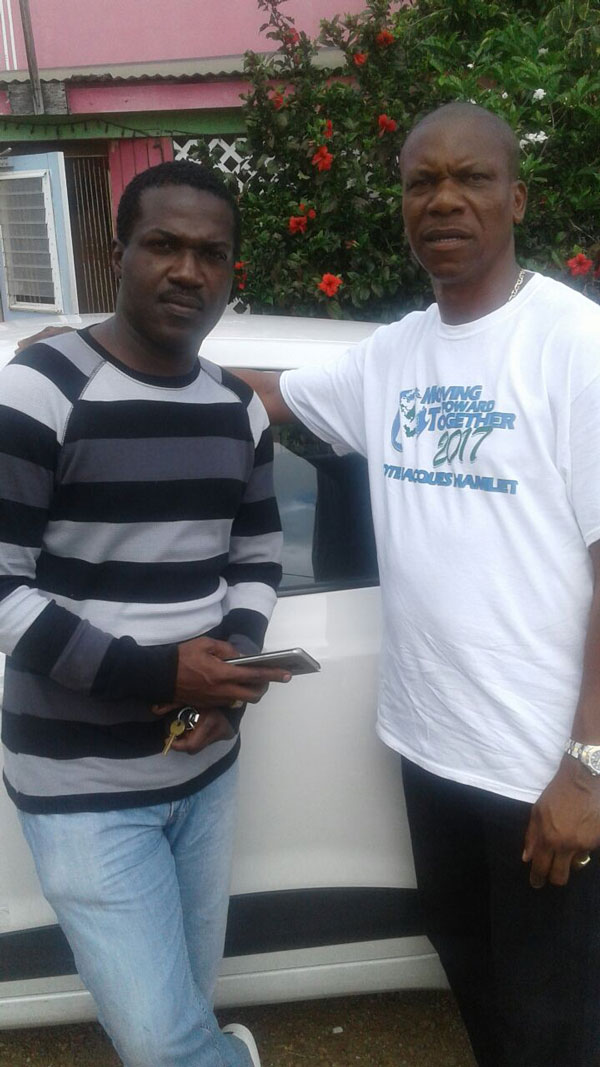 MARIGOT:--- Drs. Martin Wilson has left his political party the MJP to endorse Jacques “Billy D” Hamlet for deputy in the French Parliament. Wilson said he is simply “honoring his word” to Hamlet who supported the Alliance for Hope, Justice, and Prosperity (MJP) in the territorial election of March 2017 on French St. Martin.
Drs. Wilson, an educator and the first psycholinguist from St. Martin, the second member to go against party lines, after Jules Charville, to publicly endorse Jacques Hamlet for deputy. He has chosen not to support the MJP’s candidate Marthe January Ogoundele Tessi for deputy and resign as a member of the party.
Drs. Wilson explained that when he joined the party in April 2016, it was unanimously agreed that Jacques Hamlet would support the team for the territorial election, and the party would endorse him for deputy.
“Jacques Hamlet kept his part of the bargain, so it is deceitful and dishonest that the party leader and some members did not honor their word. A rupture within the party was inevitable as some members decided to stick to the initial decision to campaign for Jacques Hamlet,” Wilson said.
He said when Ogoundele Tessi joined the party late last year, she had then gladly accepted the previous decisions made by the party with regards to the deputy election. The number two candidate on the MJP list, Wilson said, seemed to be making all the decisions in the campaign while the party leader remained silent.
“That situation was unacceptable. I stand by my belief that MJP was the best team in the March election. I had the opportunity to work with brilliant minds such as Daniel Gumbs, Genevieve Glasgow, and Bernadette Davis. Nevertheless, the party lacks leadership and has lost all credibility when it decided not to honor its word with regards to endorsing Jacques Hamlet,” Wilson said.
He continued: “Furthermore, the worship of favoritism and the managerial ideologies of the party’s candidate for deputy, from drafting out an unattractive list to the public for the territorial election to unrealistic policies, along with the party’s lack of concern for all members, are the reason other members left the group and decided to voice their unhappiness publicly. Though my discontent was apparent before the second turn of the March election, I stayed silent not to tarnish the party’s image right before a crucial vote.”
Wilson said Jacques Hamlet has contributed tremendously to the development of the team in more ways than others. He said Hamlet is the best candidate to represent St. Martin in the French parliament.
“Contrary to what some may say or think, he is indeed well-educated, outspoken, eloquent, and very informed about the procedures of the organic law. A key function of the deputy is to participate actively in debates in Paris,” Wilson said.
Wilson described Hamlet’s running mate Abigail Pavot, as a young and dynamic architect, very practical and skillful, with great vision. He said, Hamlet/ Pavot is a perfect combination of experience, wisdom, youth and new ideas.
“Equally important, Mr. Hamlet is a person who believes in a brighter future for the people of St. Martin and has always done his utmost best for the island on many levels. He is not running for deputy to settle political scores no to gain financial stability nor fame. As a concern citizen, I appeal to my friends and family and the entire St. Martin population to give credit where credit is due and vote massively for our best representation ever in France. Vote for Jacques Hamlet and Abigail Pavot. As we say in our Saint Martin vernacular language. Support We own Billy D,” Wilson said.