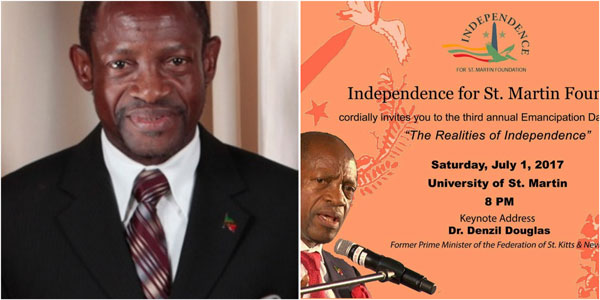 GREAT BAY:---- The Right Honorable Denzil L. Douglas will deliver the Emancipation Day Lecture at the University of St. Martin (USM) on Saturday, July 1, 2017, at 8 PM, according to the Independence for St. Martin Foundation (ISMF).
Dr. Douglas will focus on “The Realities of Independence,” the title and theme of the third annual address organized by ISMF. Dr. Douglas served as the Prime Minister of the Federation St. Kitts and Nevis from 1995 to 2015 and remains one of his country’s noted political leaders.
Dr. Douglas is also a medical doctor and his book Coming of Age: Speeches by Hon Dr. Denzil L. Douglas, Prime Minister of St. Kitts and Nevis was published in 2009.
“It is an honor to have the former PM of the Federation of St. Kitts and Nevis accept our invitation and to share with the people of St. Martin the critical, behind the scenes, first hand, and collective experiences of the most recent nation in the Caribbean to gain political independence,” said Joseph H. Lake, Jr., ISMF president.
“Admission is free to the Emancipation Day Lecture at USM. We’re inviting all of the St. Martin people to attend. There will be a question-answer period with Dr. Douglas and a reception for the people to meet and talk with our keynote speaker,” said Lake following his appearance on the Culture Time radio program on Sunday. Lake is also a political scientist and author.
In addition to the ISMF lecture, the St. Martin Emancipation Day schedule of Saturday, July 1 is packed with family, official, church, and cultural foundation activities — observing and celebrating the island-wide Emancipation of St. Martin people from the evil institution of Slavery as of 1848, said Dr. Rhoda Arrindell, author of Language, Culture and Identity in St. Martin.
The official wreath laying at the Freedom statue roundabout — WJA Nisbeth Road/Sucker Garden Road — takes place in the early morning of July 1.
The annual Emancipation family picnic at Emilio Wilson Park will start at 1 PM, also on Saturday. The program includes dance, song and music performances by popular artists, poetry, traditional food and drink, and a fashion show of clothing from St. Martin’s “Traditional Period” (1848-1963), said organizer Nkosazana Illis, head of the VOICES foundation.