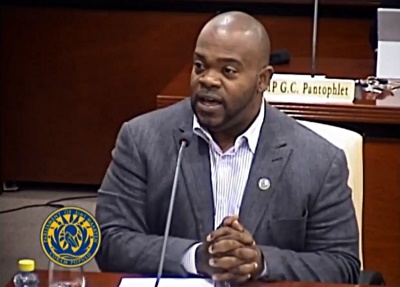 ~ Says some MPs are a travesty of representation ~

PHILIPSBURG:--- Independent Member of Parliament Christopher Emmanuel on Wednesday said it may be easy for other MP’s to dismiss him as forceful in defending the people of St. Maarten, but he gets the distinct feeling that the same MPs are completely disconnected from the people and “they have to go”.
MP Emmanuel said he cannot fathom how MPs supporting the current Council of Ministers and Prime Minister Silveria Jacobs can accept laws that will hurt their people. Laws, the MP said, that are unsupported by facts, studies, or plain logical thinking. And along the way, he added, the Prime Minister continues to lie about meeting with unions and twisting stories to fit the frame she wants.
“Legislation that is going to change the livelihood of people, their way of life their incomes and their families in general, this government want you to just rush and get it done. They want us to pass legislation with no end in sight. They do not produce documents, they dismiss the unions, they withhold information and yet we must just pass it because that's what the Dutch want. This is a bad government and they need to go,” MP Emmanuel.
The MP on Monday and Tuesday got into tense exchanges in the Central Committee meetings with Prime Minister Jacobs when government responses to his questions on benefit and salary cuts were “far from adequate”. Emmanuel asked more than 100 questions combined on all three laws that the government “is trying to force down our throat.”
He continued: “When you ask them about their economic recovery plan that was supposed to be guided by experts and in development since Jesus was a little boy, they can’t answer you. Stop for a minute and understand this. The world has been in the grip of a pandemic for a year. The government of St. Maarten cannot tell its people or its Parliament about an economic recovery plan that they themselves announced. Think about this for a moment. One year into the pandemic and the government is doing exactly the same as they have a year ago, nothing!”
With the exception of cutting salaries and benefits, the MP added. “Please my people, question your representation. Imagine that out of 15 members of Parliament, only three MP’s question the government about cutting people salaries and benefits and changing their lives. Three out of 15. Myself, MP Buncamper, and MP Wescot-Williams. Three. These are the people that were elected by you the people. And they don’t have any questions? This is a travesty of representation. This is a bad government and they have to go,” MP Emmanuel said.