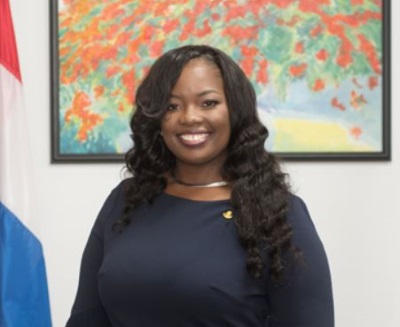 ~ People criticize government and Minister of Justice they have done --- Richardson.

PHILIPSBURG:--- Minister of Justice Anna Richardson shared serious concerns over the arrests of several students who have been busy breaking the law since the reopening of schools.
The Minister said that a student has been arrested for narcotics possession and a pellet gun while in school, another was arrested for narcotics possession in school while two students are in police custody for causing serious bodily harm to another student. In another case, students were arrested for pelting eggs on cars causing damage to private property.
The Minister said that whenever government attempts to do anything she as Minister of Justice or government is being criticized. Richardson said there need to be communities that will strive to do or take positive steps in guiding and protecting the youths of St. Maarten.
The Minister of Justice further stated that the youths of St. Maarten are in a critical situation where they are crying out for attention or they are not receiving the type of support they need. Steps are being taken by teachers, school boards, and other stakeholders to ensure that everyone is safe while in school.