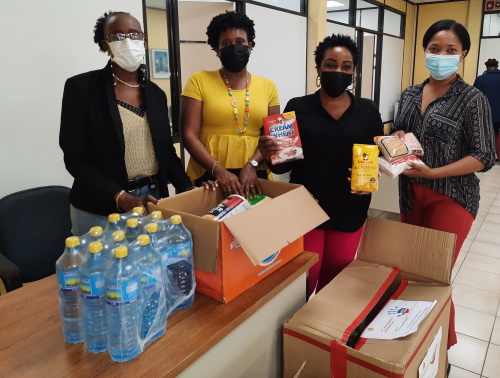 PHILIPSBURG:--- Most countries are experiencing a challenging time due to COVD-19 and the resulting economic crisis. In addition to the difficult economic situation worldwide, Haiti suffered a massive earthquake in August that caused the loss of life and extensive property damage.

In the aftermath, a group of Sint Maarten police officers established a committee tasked with collecting donations from within the police organization for the Haitian people.

Over the last few weeks, the committee has collected more than three boxes of food and other goods. The donation package was handed over on Friday to one of the Haitian organizations operating on Sint Maarten.
The management team of the Police Force of Sint Maarten KPSM expresses its appreciation to all police officers and all other personnel for their support for this humanitarian response. Special appreciation is also expressed to the donation committee for coordinating this initiative.