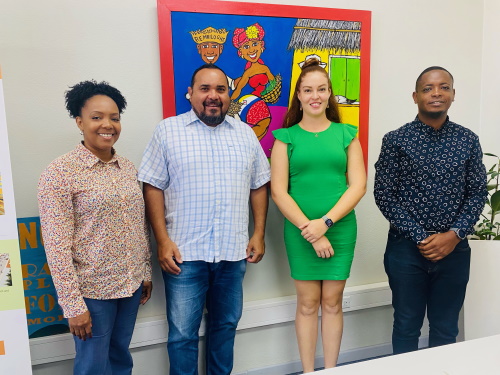 SABA:--- A delegation of the Saba Island Council paid a working visit to Bonaire earlier this month. The official four-day program included meetings with members of the Bonaire Island Council, Bonaire’s Island Governor Edison Rijna, Commissioner Nina den Heyer, the national parks foundation STINAPA, the Health Insurance Office ZVK, the Immigration, and Naturalization Department IND and BES(t)4Kids, as well as the Bonaire Day celebration.
The Saba delegation consisted of Island Council Members Vito Charles and Esmeralda Johnson, and Island Registrar Akilah Levenstone. Other Members of the Island Council were unable to travel to Bonaire due to other commitments. The delegation traveled to Bonaire on Wednesday, September 1, and returned to Saba on Wednesday, September 8. This was the first time in two years that a delegation of the Saba Island Council visited Bonaire. Last year’s visit didn’t go ahead due to the pandemic.
The delegation had important meetings with three members of the Bonaire Island Council: Esther Bernabela, Elvis Tjin Asjoe, and Désirée Coffie. Discussed were, among other things, the cooperation between the Caribbean Netherlands islands, poverty, the social minimum, connectivity between the islands, the free allowance, and the cost of living.
The Saba delegation expressed support for the motion that the Bonaire Island Council adopted in early September 2021 with regard to the needed establishing of the social minimum and the association measures to combat poverty. According to Council Member Charles, the motion showed that it is important to work together as islands in order to send a stronger message to The Hague.

Close collaboration
Working closely with the other two Island Councils, in general, is important. “Our visit to Bonaire and the meeting with the Island Council Members there showed that it is important to meet with our counterparts to discuss developments for we face similar challenges and issues,” said Charles.
For example, in the area of connectivity, residents from both Saba and Bonaire have to pay high ticket prices for flights to neighboring islands. The cost of living is high in all three Caribbean Netherlands islands. Ideas about how to lower this cost were discussed.
The meeting with Bonaire Commissioner Den Heyer was very good, said Charles. “She has always had good relations with Saba. She again expressed support for cooperation. It was good to see that she and the Island Council share the same views.”
While on Bonaire, the Saba Island Council Members brought up the idea to have a meeting with the Island Councils of Bonaire and St. Eustatius later this year. Ideally, also participating would be the Executive Councils of Bonaire and Saba, and the St. Eustatius Government Commissioners. “We want to have some type of conference with the Island Councils and