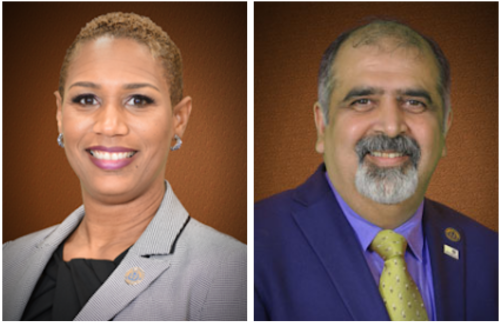 PHILIPSBURG:--- The faction leader of the United Peoples Party (UPP) MP Grisha Marten Heyliger has been elected chairlady of parliament on Friday morning. Of the 15 members of parliament, 11 votes were cast. 9 of which was for MP Grisha Heyliger Marten while two voted in favor of MP Ludmilla de Weever.
Heyliger Marten, the faction leader of the UPP and coalition partners with the National Alliance was elected as chairlady after the scandalous audio tape was leaked on social media which led to him resigning from the chair of parliament and taking time off to deal with his personal issues.
The second vice chair of parliament elected on Friday morning is Sidharth Cookie Bijlani with 6 votes in his favor, two votes were blank while MP Ludmilla de Weever received two votes while MP Ludmilla Duncan received one vote. National Alliance Leader William Marlin who is currently off-island on medical remains the 2 vice-chairmen of parliament. With Friday's election, St. Maarten now has a female Prime Minister and Chairlady of Parliament.
With Friday’s election, the presidium of parliament is now complete with MP Rolando Brison being the new faction leader for the UPP faction.