~ Buncamper filed an appeal, but will be suspended from Parliament~ 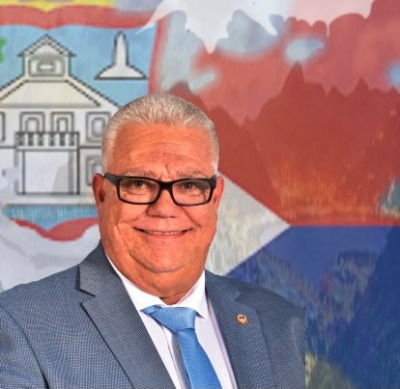 PHILIPSBURG:--- Independent Member of Parliament Claudius Buncamper has been convicted in the Ruby case that was filed by the Prosecutors Office.
The court convicted the longtime civil servant to 32 months imprisonment and has banned him for a period of 7 years as a civil servant, while his wife Maria Buncamper Molanus has been sentenced to 10 months imprisonment.
In the meantime, the court also sentenced Leroy La Paix and Roberto Flanders to 12 months conditional with 210 hours of community service.
In the meantime, the Independent Member of Parliament confirmed in an invited comment to SMN News that he has filed an appeal against the convictions rendered against him and his wife on Thursday.
Based on the ruling rendered on Thursday the Independent Member of Parliament will be suspended from the Parliament of St. Maarten even though the conviction is not irrevocable. Even though Buncamper has declared himself an independent Member of Parliament the seat will now return to the USP for them to appoint a deputy.
Article 50 paragraph 2-b states when a Member of Parliament is convicted for bribery and was sentenced to more than one-year imprisonment, they are automatically suspended from parliament and be replaced by a deputy even though the sentence is not irrevocable.
Based on this the next person in line to deputize for the Independent Member Parliament will be Chanel Brownbill who was convicted for tax fraud. However, Tax Fraud is not on the list for mandatory suspension. Brownbill was sentenced to  8 months irrevocable prison sentence which was confirmed by the Supreme Court. The only thing that will stop Brownbill's appointment to the Parliament of St. Maarten is if he is picked up by the Prosecutor's Office to serve his time in prison.
While on suspension MP Buncamper will receive his remuneration until the end of the parliamentary term ends. 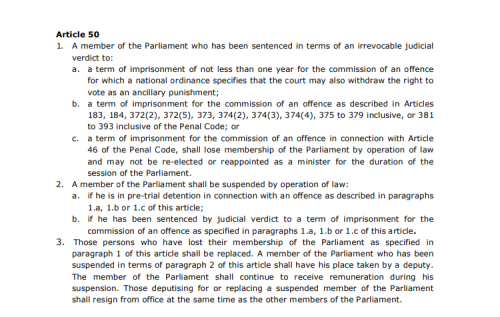 Member of Parliament convicted for bribery to 32 months imprisonment and a 7-year ban on holding public office in 'Ruby' case.

C.B., a Member of Parliament was sentenced by The Court of First Instance to an unconditional prison sentence of thirty-two (32) months and to a 7-year ban on holding public office for his role in the Ruby case. The suspicion against C.B. was focused on corruption during his tenure as Head of Infrastructure at the Ministry of Public Housing, Spatial Planning, Environment, and Infrastructure (VROMI) and the misuse of public funds for personal purposes. C.B. was found guilty of requesting and accepting bribes of over 600.000 guilders in a period of 2,5 years in relation to the tendering procedure for management contracts of the landfill on Sint Maarten. The bribes included lucrative contracts for his wife and son. He was also convicted for forging invoices related to the sewage plant in order for VROMI to pay for personal expenses for his family and the Lions Club.
C.B. was acquitted for the abuse of power related to the relocation of business premises operated by his family members on a parcel in Kim Sha Beach.
Co-suspect M.B.M was sentenced to 10 months unconditional imprisonment. She was found guilty of taking bribes in association with her husband C.B. The Court took into account that M.B.M. was previously convicted for fraud.
The Court ruled that the behavior of M.B.M. and C.B. in particular inflicted damage to the trust of the people of Sint Maarten and damage to the integrity of the public administration. As role models, they should have only acted in the interest of the people of Sint Maarten. Also did neither C.B. nor M.B.M. show any acknowledgment or insight into the criminality of their actions.
The other two suspects L.L. and R.F. each received 12-month conditional prison sentences and 210 hours of community service for paying the bribes. The corporate entity they used in the tender procedure was convicted to a conditional fine of 100.000 Antillean guilders. The Court took into consideration that although their acts were severely undermining to society, they do not deserve an unconditional prison sentence as they cooperated with the investigation and offered, to a certain extent, insight into the facts even though they incriminated themselves with their openness in the
matter. It was also taken into account that the C.B. and M.B.M. had a significantly more active role in staging the corrupt microsystem than L.L and R.F. had.
The sentences were slightly lower than requested by the Prosecutor’s Office because of undue delay in the Ruby Case. However, this does not apply to the ban on holding public office: the Court ruled that due to the severity of this case, a 5-year ban is not adequate and it should be 7 years instead. The outcome of this case shows that the justice system takes crimes that harm the country and by extension every member of the society, very seriously. This type of crime is even more damaging to the community when perpetrated by people who should serve as role models and guardians of the patrimony of the people. Civil servants and those contracted by the government to execute tasks on its behalf must carry these out with the good of the country and its people in mind and not betray the trust and confidence placed in them.
The Ruby investigation was started in July 2018 by the RST Investigation Team under the authority of the Anti-Corruption Taskforce (TBO) of the Attorney-General’s Office of Curacao, St. Maarten, Bonaire, St. Eustatius, and Saba, due to strong indications of structural mismanagement of the landfill which resulted in serious health risks for the community of Sint Maarten.
On February 12, 2021, the Court of Appeals of Aruba, Curaçao, Sint Maarten, and the BES-islands ordered the prosecution of C.B. This order was required as the Constitution of Sint Maarten and the National Ordinance of individuals with Political Authority prescribe that the Prosecutor’s Office can only prosecute individuals with political authority after an order to that effect has been issued by the Court of Appeals.
For a well-functioning democratic society, it is essential that citizens have confidence in their government and public administration. Administrative corruption is a multi-faceted phenomenon that occurs typically at the interface of public and private interests. Corruption can permanently disrupt a society, it undermines the integrity of the government and leads to unfair commercial competition. For this reason, TBO takes indications of corruption very seriously and, if necessary, has them thoroughly investigated.