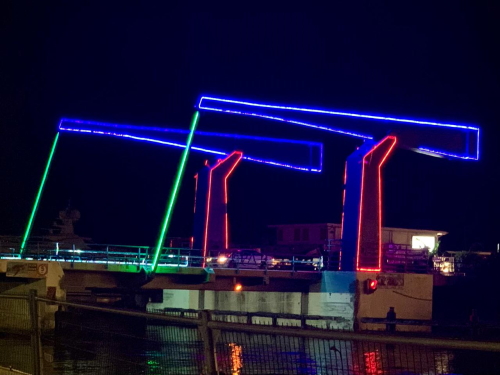 POINTE BLANCHE:---  On Christmas Eve, Friday, December 24, the Simpson Bay Bridge came to life this holiday season after it was decked out with thousands of lights transforming one of the nation’s key traffic arteries for motorists and sea traffic.
This is the first time that the bridge was decorated and lighted up for the holiday season.
There are also colored changeable lights on the Causeway Bridge for the festive season.
The Minister of Tourism, Economic Affairs, Transportation and Telecommunications Hon. Roger Lawrence stated, "The first-ever lighting of the Lejeuz ‘Simpson Bay’ Bridge is a great initiative by our very own Addison ‘Shadow Man’ Richardson, Port St. Maarten and crew for this Holiday season.”
Port St. Maarten Group (PSG) Chief Executive Officer (CEO) Alexander Gumbs would like to thank Benjamin Ortega, Addison Richardson, and the team who worked diligently within a short space of time to install the festive season lights on the Simpson Bay Bridge.
“I would like to take this opportunity to wish all stakeholders and partners happy holidays and all the best as we transition into 2022. Spend your holiday season in a safe manner with family and friends,” PSG CEO Alexander Gumbs said on Monday.
Addison Richardson, a PSG contractor & coordinator of the project, along with his team, worked over a period of several days erecting the light fixtures for the colorful display.
Richardson's initial thoughts were to have a red, white, and blue patriotic display but ended up with a multi-holiday effect with a mix-match ending up with what is currently on display for all to see this holiday season.
Addison Richardson added that this project was a first for him and the team, which had to take a lot into consideration when it came to the operations arms and other moving parts of the bridge structure during its daily operation.
Richardson said he was thankful for being assigned the project after hearing from one onlooker who said: ‘This is history. You are doing something that has never been done. You and your crew will be spoken about for many years.’ Addison said he is proud and thankful for what his team has achieved.
PSG CEO stated that the intention was to have lights on only festive seasons and or special events however the call from many within the public is now to have the lights daily as a fixture to the bridge. We would have to assess the possibility and adjust accordingly, if possible, to facilitate daily lighting.
The Simpson Bay and Causeway bridges will allow pedestrians to immerse themselves during the evening hours in a wonderland of lights which is just awesome.