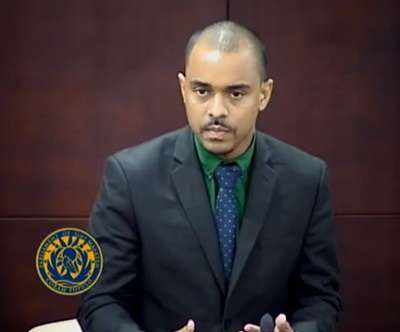 PHILIPSBURG:--- Leader of the United People’s Party MP Rolando Brison has taken note of numerous calls from both consumers and the business community of how the convenience and effectiveness of the banking sector’s policies have hit an all-time low. “I find what I’m seeing and hearing to be absolutely appalling,” stated Brison.

“Because many people in the community know I have not only been extremely vocal about the need to improve our banking sector’s treatment of the consumer but have also put in a significant amount of work legislatively to help fix the consumer banking experience, I have been flooded by communication about many ways in which the banking sector is making it harder and harder for people to do banking in St. Maarten. It’s appalling that some banks continue to introduce new policies that hurt the consumer experience rather than improve it,” stated MP Brison.

Brison has drafted and shared with the Central Bank legislation to improve customer experience at banks. The goal of the legislation is to create the right to a basic bank account that must be granted within 3 weeks, limit the banks' ability to unilaterally close your account or cancel your loan, and most importantly, creating a “Consumer Banking Protection Agency” that would act like an ombudsman for banks, free of charge to any resident. However, banking legislation needs to be vetted by the Central Bank and is not something the MP can effectively initiate on his own. “I had hoped that pending this legislation, the banks would hear the cry of the people and the Parliament to treat the customer better, but this, unfortunately, seems to have fallen on deaf ears,” stated Brison

He expressed his disappointment with the worsening bank policies, and sympathizes with the thousands of people affected, many of whom every day tell him of their banking “horror stories”. “Not a week goes by on my weekly live radio show where a caller doesn’t call in to tell their ‘banking horror stories as I have chosen to call them. These stories range from taking many months just to open a business account at their existing bank, impossible to reach their banks, loans, and mortgages being unilaterally canceled by banks, and many other concerns.

“My complaint is not a slight against the banks’ employees. On the contrary, I sympathize with employees, many of whom I know are embarrassed to have to uphold inconvenient, antiquated, and unjust banking policies. My father has worked at the bank for 40 years, and even he is ashamed to see what the banking sector has become. It used to be a pleasure, a proud thing to work at a bank; now many customer service agents tell me they feel ashamed to have to uphold policies they themselves know are nonsensical”.

The announcement by the Windward Islands Bank (WIB) that their customers who “commingle” business and personal funds could face losing their accounts a flawed and problematic. He referenced an InfoGraphic from WIB in which a “John Doe” working at a hardware store could not deposit his funds made in a landscaping “side job” without losing their accounts. “Obviously if someone owns separate business, like an NV, it is advisable that they create another account for that NV. But their own ‘John Doe’ example is highly flawed,” Brison said. He explained that if John Doe works at a hardware store and places his salary on his personal account, but also as a sole proprietor does landscaping, the legal identity of John Doe is the same.  “There is no ‘company’. The law allows for certain works or “side jobs” to be carried out without having a company, or as a sole proprietor. Legally speaking, a sole proprietor is the person (so John Doe is his landscaping company) and not a ‘legal entity. I really wonder if the bank has thought this through.”

“In these difficult times, locals are doing all they can aside from their work to make ends meet, and rather than the banks accommodating the consumer, they are now threatening them with bank account closures. And the purpose is what, to prevent money laundering? Well, if John Doe doesn’t put his money in his account and instead stockpiles his landscaping cash at home, that in and of itself not only could promote small scale money laundering, but creates an extremely unsafe situation in our communities with so much cash being stockpiled in peoples homes.”

Brison noted that to add insult to injury to the commingling situation, banks are making it harder and harder for people to open accounts. “So let’s say John Doe gives in and wants to open his business account for his landscaping work. You would think the bank would do their utmost to expedite the opening of their business account, right? Well, from all the reports I receive, the experience locals get in opening business accounts have become a nightmare.”

Shameful what people have to do to reach their bank

Brison took note of the fact that a well-known local business went to the length of buying an advertisement in the newspaper, pleading to the locals banks to get back to him. “It’s really shameful that banks are so bad at dealing with their clients, that here we have an iconic local business in Philipsburg that has to spend money to take an ad just to get their own bank to contact them,” stated Brison.

Brison believes the only solution is to enact his, or some version of his legislative initiative to establish the right to basic bank account and create a consumer watchdog agency for banks. “The banks can’t go against the law. But if we don’t have laws for them to follow, they will continue to do what they want. Therefore my initiative to legislate the consumer aspect of banking oversight is much needed and needs to be prioritized,” stated Brison. However, the MP has taken note that the Central Bank did not include the law in their 2020-2024 legislative agenda. As a result, he intends to submit a motion during the budget debate to call on the Minister of Finance of St. Maarten to instruct the Central Bank to present him with a draft of a Consumer Banking Protection law that is modeled after Brison’s draft, and to amend their legislative agenda accordingly. “I am also in discussions with colleagues in Curacao, who, equally frustrated by their banking sector, are interested to enact the same motion in Curacao as well. Having both ministers instruct the CBCS will probably emphasize the need even more”, Brison concluded.