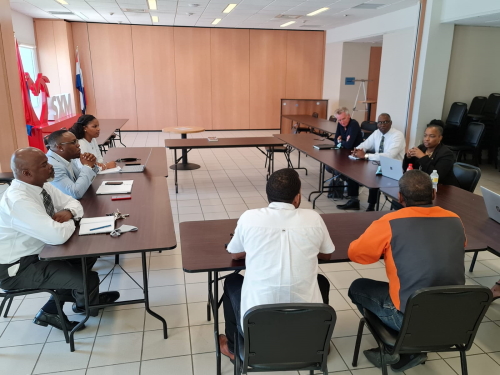 PHILIPSBURG:--- On March 14th, 2022, the Minister of Justice, Ms. Anna E. Richardson, and the Minister of Public Housing, Spatial Planning, Environment, and Infrastructure (hereafter VROMI), Mr. Egbert Doran held a meeting to discuss ways in which both ministries can collaborate and coordinate working opportunities for inmates at the Pointe Blanche prison and House of Detention. Also present during the meeting were the Act Secretary-General and Head of New Projects, Mr. Kurt Ruan, Act Head of Infrastructure Management, Mr. Charlon Pompier, Section Head of Operations, Mr. Edelmiro Jansen, the Prison Director, Mr. Steven Carty, the Prison Program Manager, Mr. Rob Kievitsbosch, and supporting staff. In the efforts to expand the rehabilitation and reintegration programs for the inmates nearing their release date, the possibilities were explored between both ministers to relaunch an inmate work program.

A similar inmate work program existed before, whereby the Ministry of VROMI collaborated with the Ministry of Justice in providing inmates with infrastructural and/or repair projects in the community that the inmates could partake in. There is a number of projects that have been executed with the assistance of inmates in the past such as the painting of the entire Festival Village and the Government Administration Building, welding of the Government Administration Building fences, maintenance of school grounds, and more. Both ministries are eager to relaunch the inmate work program for the betterment of inmates and their reintegration trajectory.

The Minister of Justice stated: “I am elated for and encourage the enthusiasm of our inmates to be constructive and productive. During the past few weeks, the positive feedback, willingness, and cooperation that our inmates have been displaying have been phenomenal. I am also happy that my colleague minister and I, together with our teams, we're able to discuss such a great initiative for our inmates; one in which they will be given the opportunity to be a part of a work program outside the walls of the prison.

The goal of this initiative is to create motivation for a positive transition in re-socialization while reducing recidivism by connecting past offenders with positive opportunities for careers and positive lifestyles. Lifestyles that will keep them far away from criminal activities. The hope is that all participants will value this opportunity and work to establish good relationships with potential employers, giving themselves open doors once they have served their time”.

The Ministry of VROMI has an array of maintenance and repair projects that inmates can partake in such as re-painting buildings, clean-up projects, road signage, and more. Having the inmates participate in such projects has a number of positive effects for not only the inmates but the community at large. The inmates will learn the skills such as painting, welding, carpentry, mechanical work, and more within the prison walls. The inmate work program will then provide the inmates with an opportunity to apply their skills in practice. This skill development will increase the inmates’ chances of finding employment in similar fields after release. This ultimately can decrease the inmate recidivism rates and them returning to prison. The inmate work program therefore can serve as a deterrent for crime which in turn benefits society.

"It is indeed an honor to work alongside my colleague Minister of Justice, the Honorable Anna Richardson on such a meaningful project such as this. The discussions on the inmate work program are of extreme importance as it maximizes job opportunities for individuals who have “fallen through the cracks” and are now willing to contribute meaningfully back to society. This program is meant to ensure that a larger number of these individuals are provided with the opportunity to learn skills and gain the working experience needed to prepare them for the workforce upon their return to society. As a former Minister of Justice myself, I know how important a project such as this is and I, therefore, commend the current Minister of Justice with this great undertaking and promise that my Ministry will do everything possible to assist in any possible way to ensure that this project is successful”, stated the Minister of VROMI.

“I am very pleased with this initiative and commend both Ministers for their efforts in realizing this project. Proper reintegration is a key factor in the task of each and every prison, certainly in the Pointe Blanche prison and House of Detention”, stated Mr. Carty, the prison director.

Prior to matching inmates to the projects, the inmates will undergo an extensive intake and selection process whereby the prison can determine whether the inmates are fit for the specific task. The overall behavior of the inmates during incarceration, their skill sets, and the remaining sentence time will play a key role in the selection process. Guaranteeing the safety and security of the community and of the inmates themselves during these projects is of utmost importance and the starting point of each project that is considered. All participating inmates will be outfitted with an ankle bracelet and appropriate security will be present at all times.