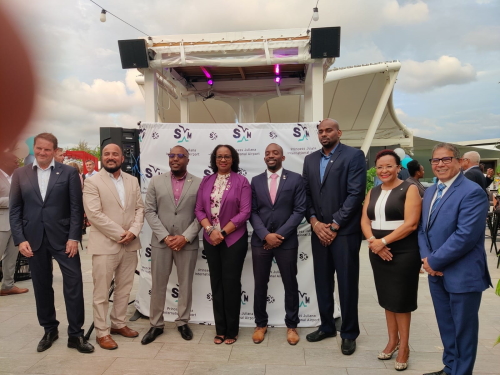 SIMPSON BAY:--- The members of the Council of Ministers namely Prime Minister Silveria Jacobs, Minister of Finance Ardwell Irion, acting Minister of TEATT Omar Ottley, and Minister of VROMI Egbert Jurendy Doran hailed the refinancing of the Princess Juliana International Airport (PJIAE) a success.
Chief Executive Officer Brian Mingo credited the hard work to the Chief Financial Officer Ben van der Klift who pulled off what seemed almost impossible.
Van der Klift thanked the Council of Ministers and Governor of St. Maarten for allowing them to move forward with the refinancing which would enable the completion of the terminal building.
Credit was also given to Troy Washington who spearheaded the refinancing. The AIB bank as (46%) came from St. Maarten institutions, 39% from Curacao-based institutions, and 15% from Aruba-based institutions. AIB Bank N.V. from Aruba acted as mandated lead arranger and RBC Bank N.V., a St. Maarten-based financial institution, will be the security and facility agent.
The refinancing was obtained with a lower interest rate. The USD 90 million refinancings were obtained at a 4,74% interest rate which would allow PJIAE to stabilize its cash position.
Minister Omar Ottley who is also the minister of labor said that they are a team that stands together. He said that St. Maarten is a special place because there are investors that invested after two major hurricanes and a pandemic. Ottley said that with determination anything can be accomplished. He said PJIAE is the gateway to St. Maarten and the country’s prized possession which includes the employees of the airport.
Finance Minister Ardwell Irion said he advised van der Klift to ensure that he integrates with the country and its people because St. Maarten is a special place.
He described PJIAE as the heart of the country’s economy, thus the refinancing is not just for the terminal building instead these investors invested in the employees and its people.
The short ceremony on Wednesday included a toast and a moment for the attendees to celebrate the milestone.