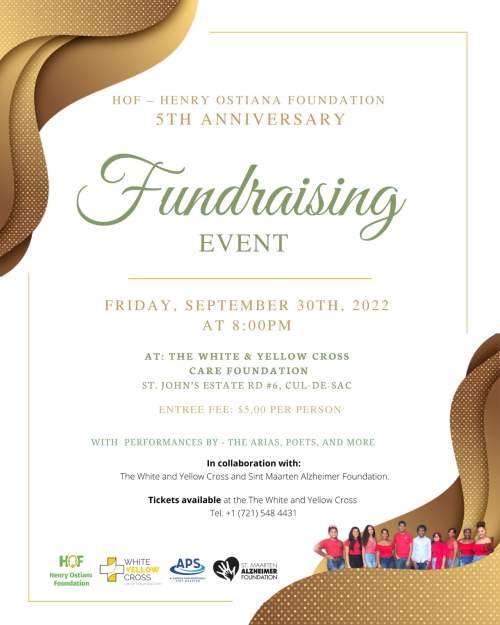 PHILIPSBURG:--- Today is World Alzheimer’s Day. This special day aims at raising awareness about Alzheimer’s disease, dementia, common symptoms, and risk factors attached to it. In honor of this special day, the White & Yellow Cross Care Foundation (WYCCF) will host the 5th-anniversary Fundraiser of the Henry Ostiana Foundation (HOF) on Friday, September 30th. The event is open to the general public.

This event starts at 8:00 PM at the White & Yellow Cross Care Foundation in St. Peters. It will be a night of entertainment and awareness around this particular topic. Tickets are only 5 USD, and all the proceeds will go towards Alzheimer’s awareness and relief in the Caribbean. Refreshments will be served.
The Henry Ostiana Foundation was founded in 2017 when the late Henry Ostiana was diagnosed with vascular dementia, which is a form of Alzheimer’s disease. Together with his wife, Mireya Ostiana, Henry was determined to talk about his disease rather than keep silent. Especially in the Caribbean, there is still a taboo on mental health issues, and Alzheimer’s disease and dementia are no exceptions.

With the help of the St. Maarten Alzheimer Foundation, Henry appeared at several radio stations and stages to talk about his battle against this inhuman disease. Together with his wife, they aimed to inform the public of Sint Maarten what it means to be diagnosed with this disease. What it means for the person, but also what it means for the direct family and loved ones. One can slowly lose specific abilities, which may result in losing the independence one had their whole adult life. Realizing these changes within yourself and the gradually increasing dependence on others can be very difficult to accept.
In most cases, the family members take on the care out of love, yet without a good understanding of the implications. What may begin with light help can slowly become a full-time job. This gradually increasing workload often proves very hard for family members to keep up with. The caregiver might still have a job, and other responsibilities and, on top of that, may not be trained to provide this type and amount of care. Most people who went through this indicated that they wished they had more information, understanding, and support from the start, which is precisely why awareness is so important.
Henry Ostiana, while fighting this disease and the stigma surrounding it, eventually passed away. However, his wife, Mireya Ostiana, while grieving, decided to continue the mission of her late husband: to spread awareness about the implications of Alzheimer’s disease, especially in the Caribbean.

One of the core values of the WYCCF is client-centered care. This means not only physically taking care of a client but also informing and supporting the people around the client so that the care continues outside our doors. This benefits the client but also the informal caregivers, on which it often takes a heavy toll. For this reason, the WYCCF organizes bi-monthly Alzheimer’s Support Group meetings, from which the next one is this Saturday, September 24th, at 4 PM at the St. Martin’s Home in St. John’s.
In honor of World Alzheimer’s Day, the WYCCF is happy to host the 5th-anniversary fundraising event on Friday, September 30th, at the Sint Martin’s Home. The tickets are only 5 USD and are sold at WYCCF. To purchase your ticket, please contact Irene Kemper-Brown on 5484424. All the proceeds will go to Alzheimer’s care, awareness, and prevention in the Caribbean.