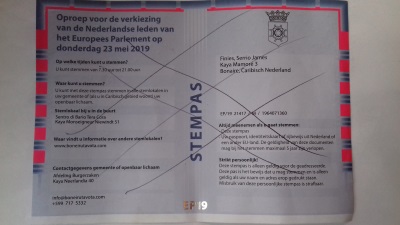 The people, citizens of our island of Bonaire, with a total electorate of about 14thd are invited to vote for the Dutch members of the European Parliament on May 23, 2019. This for us is another democratic trap where for a seat for the Netherlands in the EU parliament is needed over 180thd votes based on last elections of 2014 with a voters turnout of ca 37%. Contrary to EU that was founded on representative democracy, that decisions must be taken as closely as possible to citizens, this election a facade, another mockery to democracy, adds on to our local government , island council representatives, which have no responsibilities or power to decide and govern the Bonerian peoples as the powers are held by the 2nd chamber , the Parliament of the Netherlands consisting of 175 members and the Dutch Senate consisting of 75 members situated in the Hague , Netherlands.

The values on which the EU is founded, Article 2 of the EU Treaty, respect for human dignity, freedom, democracy, equality, the rule of law and respect for human rights, including the rights of persons belonging to minorities and banning eugenics are grossly violated:

On October 10, 2010 (10-10-10). with the dissolution of the Netherlands Antilles the in-defensive smaller islands Bonaire, Sint Eustatius and Saba were annexed , re-colonized, embedded and integrated under unequal rights in the Dutch constitution against the wishes of the peoples and maintained up today the peoples in this imposed colonial status despite legal democratic rejection of the peoples through referenda in 2010, 2014 and 2015.

Our autonomy was reversed on 10-10-10 instead of assisting us enhancing and developing us towards more autonomy. This constitutes of grave violations of the Charter of the United Nations causing a setback in the governing of our islands which has led to a re-colonization that infringes the Charter of the UN especially Article 73 Chapter XI, Article 103 Chapter XVI, and resolutions 742, 747, 945, 1514 and 1541, all of which address the sacred rights of our peoples.

• Abusive undemocratic actions by the Dutch government of their unilateral legislative powers and military and police powers which deposed the legitimate elected government of Sint Eustatius February 2018 and appointed a non-elected colonial ruler to govern and depriving the citizens of St Eustatius of their democratic rights by blocking the scheduled free election last March.

• Open immigration policy: increase as high as 400% in immigration of non-Bonerians mostly European-Dutch settlers with the power to vote within 3 months in our local elections. At the moment our population doubled since these eugenics-policies were enforced and the Bonerians became a minority on our own island, and are on the path of a systematic eradication, ethnic cleansing institutionalized.

• Camouflaged euthanasia and abortion practices in the healthcare sector exploding the crude death rate on the Bonerian population to over 60%.

• Imposing of all possible policies practices that sub-duct the economic strength and aspiration and self-reliance of indigenous Bonerians. Our land and natural resources has been repossessed by the colonizing administrative power.

Our sister islands of Curacao, Aruba and St Maarten are on the same path to be recolonized administratively by the Hague, that meanwhile remain ultimate powers over them, and has taken over their internal matters and appointing a non-democratic supervisory financial board deciding over the islands budget, parliaments and governments. Same is the case with the judiciary system which is under control of the Hague deciding who will be politically targeted and prosecuted if not collaborating with the Dutch agenda. Contrary to developing good peaceful relationships with neighboring countries the Netherlands forced the Curacao government into provocation with neighboring Venezuela with high risk of escalation towards an armed conflict of global catastrophic consequences that will drag also the European Union member countries into it.

We are urging the European Union to action to condemn and reject continuation of Dutch colonialism in the Caribbean region as it will implicate all other EU members as accomplice towards these crimes against humanity.

Sincerely Yours,
James Finies, President Foundation We Want Bonaire Back