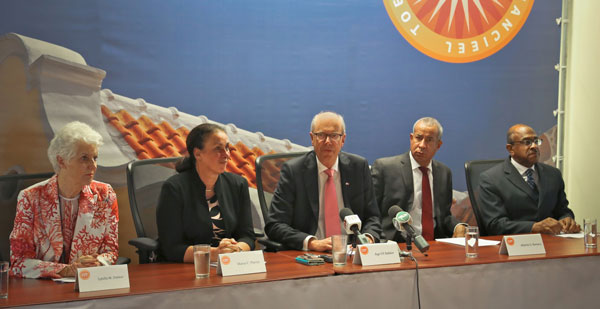 Willemstad, CURACAO:--- The Board of financial supervision Curaçao and Sint Maarten has issued a positive advice on the 2016 budget of Curaçao. The Cft deems the budget realistic and there are visible signs of economic growth. Measures that were taken previously by the social funds prove to be effective, although some risks can still be perceived. Up till now it seems that last year finished with a small surplus. Cft has advised Curaçao to continue on the current path of realistic estimates and the further improvement of its financial management, so all budgetary documents can be timely discussed and approved.

During a two day visit to Curaçao on March 14th and 16th, Cft met with the Governor, the Council of Ministers, the Minister of Finance, the Financial Parliamentary Committee and the Advisory Council. During these deliberations the Cft concluded that the budget will remain balanced and that improvements in the economic developments can now be noticed. The 2016 budget radiates realism, the budget has been adopted in time and it has received a positive advice from the Board.

The year 2015 is expected to close with a balanced budget after ANG 13 million has been transferred to the swinging fund (schommelfonds). Therefore for the third consecutive year Curaçao has a balanced budget. There are some uncertainties, amongst others whether the budgeted divided proceeds of ANG 30 million will be paid out in time. The realization will ultimately become evident when the annual account is adopted. The public investments, including the progress in the construction of the new hospital HNO, were ANG 222 million (3.9% of the GDP) in 2015. Yet the actual investments are lagging behind compared to the budgeted capital service and the Cft has requested to produce a more realistic and insightful capital service in the 2017 budget, so as to avoid that the Cft will have to make a provision to cover that aspect.

The Cft wants more attention for the financial situation at the CPost, which has been experiencing shortfalls for some years now, with as a consequence an increasing negative equity. Meanwhile the improvement plans are being executed. The Board has requested to be kept abreast of the progress.

During this visit the Cft will be notified of the plans that are currently being implemented to modernize the tax service and enhance tax compliance. During its next visit the Board shall elaborate on this matter.

“Attention should not slack”
The Cft has requested attention for the ongoing deferral in the submittal of the budget amendments and the accounting documents. The second approved budget amendment of 2015, on which the Board has given a positive advice on October 29th, 2015, has not been adopted yet by Parliament.

Age Bakker: “The 2016 budget looks realistic but it also contains risks, particularly in the social funds. We advise the government to stay alert. The budget was adopted on time. But timeliness is also important with regard to other budget and accounting documents, including the financial statements. This applies to both the production thereof by the Government and to the adoption by Parliament. The attention for financial management should not slack.