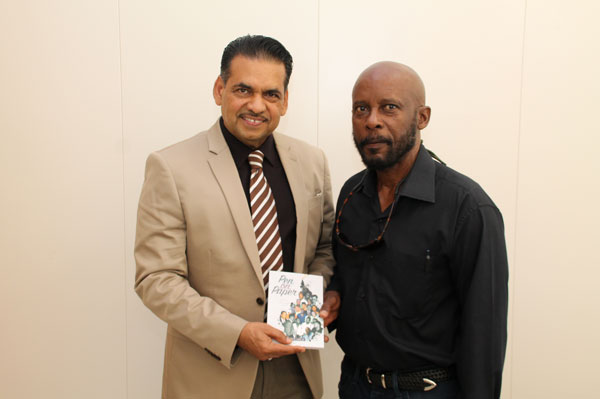 GREAT BAY:--- Presentation copies of the new book Pen on Paper: St. Martin 1970 – 2001 by Joseph H. Lake, Jr. was recently purchased by NAGICO, said Nzinga Lake, the book’s publicist.
NAGICO’s CEO Imran Mcsood Amjad was also presented with an autographed copy of Pen on Paper by Author Lake, Jr. The island’s major insurance company is “well known for promoting academic and cultural works on the island,” said Lake, Jr.
“The contributions of Imran Mcsood  Amjad and the group of companies for which he is chairman of the board help to ensure that academic and cultural works reach the St. Martin population in general and the youth and student populations in particular,” said the author while thanking Mcsood Amjad  for the generous contributions over the years.
Pen on Paper is a collection of newspaper commentaries, articles, and editorials by Lake, Jr. about combatting press freedom abuses on the island; how the pond fill dump got started; education and lack of job opportunities on Front Street; crime; elections on both parts of the island; tourism; and political advocacy for women.
The articles in the 152-page book appeared in media for which Lake, Jr. was a columnist, the associate editor or publisher and editor: Windward Islands Opinion, Shaka, Windward Islands Newsday, St. Maarten/St. Martin Newsday, St. Martin Newsday, Newsday, and St. Martin Republic.
The pictorial section of Pen on Paper includes photos of media professionals that started out in St. Martin’s print, broadcast, and Internet fields during the last 30 years of the 20th century, said Lake, Jr.
Lake is a leading St. Martin political scientist and Pen on Paper: St. Martin 1970 – 2017 is his fourth book.