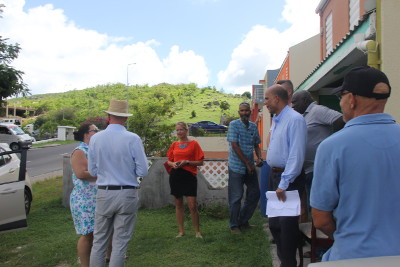 PHILIPSBURG:--- Homeowners in Belvedere that filed a court case against the St. Maarten Housing Development Foundation (SMHDF) after the foundation failed to conduct repairs since the passing of hurricane Irma managed to show Judge Alexander van Rijen the conditions under which they are living even though paying their monthly rent.
The walkthrough of the homes took place on Tuesday afternoon in the presence of the St. Maarten Housing Development (SMHDF) lawyer, the lawyer representing the homeowners and a representative of SMHDF, SMN News was the only media house that had access to the homes during the walkthrough.
The homeowners appeared before the Court of First Instance on August 31st, 2018 while the Judge is expected to hand down his decision on September 28th, 2018.
At least one day before Tropical Storm Isaac hit St. Maarten the 15 homeowners managed to display their leaking roofs, cracked walls, flooded bathroom, moldy homes to the judge and the other legal representatives as well as the representative of SMHDF.
Clearly, some of the tenants in Belvedere are living in deplorable conditions, besides dealing with leaky roofs some of them have to deal with rats, birds, and iguana feces.
Many of the homeowners told the judge that they have been living in their homes for years and the foundation does not conduct any maintenance. They said that they visited the SMHDF several times and their complaints and pleas have fallen on deaf ears.
Maria Richardson representative of SMHDF told the judge that the foundation was waiting on the World Bank Funds, she said just two months ago the foundation received funding and they ordered materials such as windows. When SMN News asked Richardson how much materials were ordered and when they expect to receive the material Richardson said that she has no idea when the materials will arrive on St. Maarten, the only thing she knew was that the materials were ordered probably in Puerto Rico.

Another excuse SMHDF gave was that the foundation did not have the funds for the repairs and the money they received from their insurer was insufficient. Richardson acknowledged that Nagico insurances paid out their claim but again said the money they received was not enough for the repairs. The technical assistant for SMHDF told the judge that the homes were built by contractors in the Netherlands and they were all faulty homes that cannot be easily fixed.
Attorney at Law Geert Hatzsmann told SMN News that the foundation is claiming that they do not have the funds to conduct the repairs but also stated that the homeowners rented the homes to own and most of them have paid double the amount for owning the homes but so far SMHDF do not want to respect the agreement and hand over the homes to the tenants whom he said paid off for their homes. Hatzmann said if the homes are turned over to the tenants then the homeowners will do their own repairs. He felt that is a win-win situation for everyone especially since SMHDF has been saying that they do not have the funds while they were underinsured.
SMHDF representatives are claiming that when the homes were transferred to the foundation they were no agreement to sell. They said local politicians played with the tenants by telling them they were renting to own while there is nothing in writing. The homeowners managed to produce a booklet from 2009 that clearly states SMHDF was granted the permission to initiate the selling of 156 duplex homes.
SMHDF also said that the tenants are not paying their rent and that there is NAF1.8M in outstanding rent.
The two flat homes that house children have non-functioning windows, cracked walls, broken doors, while at least two of them have no ceiling. The handrail in one of the homes broke off and the tenant said that ever since she moved in the home 15 years ago the railings were broken and to date, they have not been repaired. Besides the cracks there also broken light fixtures that the tenants say get water whenever it's raining.
The tenants said that SMHDF accuse them of not paying their rent, yet they are not able to produce evidence of such. One civil servant said her rent is deducted from her salary every month yet SMHDF accuses her of not paying her rent. She said recently SMHDF said because the family has dogs they are not able to visit the home to conduct repairs. Another tenant told the judge that he had an appointment with the technical assistant and that person never showed.
The homes without ceiling the owners do not have dogs, however, they are hardly any space for the tenants to move around yet the elderly woman and her young son are living in the home that has no ceiling and water is leaking through in all the rooms.

Click here to see more photos of the deplorable condition of Belvedere homes.