~ Chairlady continues to protect government by delaying the meetings.~ 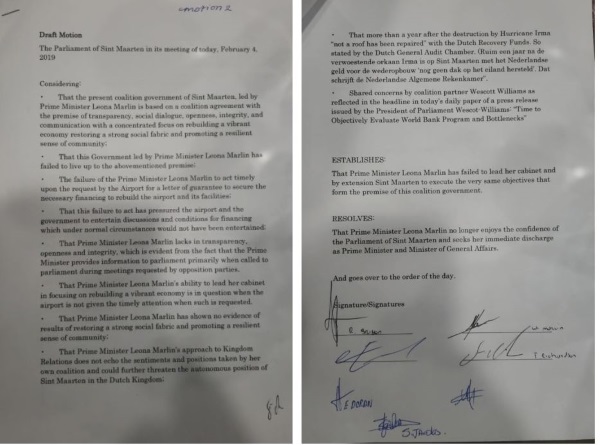 PHILIPSBURG:---Former Prime Minister and NA MP William Marlin in his presentation tabled a draft motion of no confidence against Prime Minister Leona Marlin Romeo ON Monday afternoon since she failed to lead her cabinet in the interest of the country. The motion states that the Prime Minister of St. Maarten failed to assist PJIAE in a timely manner by not providing the much-needed guarantee letter while not one roof was not repaired with the trust fund money.
The draft motion was signed by the 7 Members of Parliament from the opposition benches.
Marlin said he understands the games being played by the coalition partners he cautioned that these people could run but certainly cannot hide. He said a barrage of questions were posed to the Ministers regarding PJIAE and the $100M loan some of those questions he said was even posed by the MP’s supporting the government and they too did not get answers to the questions they posed in the first round. Marlin said if the MP’s continue to pose questions then they would only be making a mockery of the people of St. Maarten. Marlin further stated that the government simply cannot run the country. He said that Ministers are not showing up for meetings. He said the Minister of TEATT clearly lied to Parliament because the Minister was accused of not attending TEATT committee meetings and not meetings of Parliament.
Chairlady of Parliament Sarah Wescott Williams continues to abuse her power as chair to railroad parliament despite the current status of the country and the concerns that are being raised by the general public. Currently, there is a public outcry due to the lack of action by the sitting government.

Wescott Williams told Parliament on Monday that after the second round of questions is asked by Members of Parliament she would then adjourn the meeting in order to give the Ministers time to answer the questions MP Frans Richardson presented in writing. Wescott Williams said that questions submitted in writing during a public meeting are considered as questions that must be answered in writing, she said when Ministers receive questions from Parliament they have a period of 3-weeks to provide those questions even if they do not have all the answers.
The information provided to MP Frans Richardson prompted him to retract all his questions that he submitted in writing since he believes the chair of parliament is changing the rules as she goes along. Even though MP Richardson retracted his questions which was supported by his faction leader MP Rolando Brison, the chair of parliament informed MP Richardson that he has to send a letter to the Prime Minister informing her that he retracted the questions that were submitted to her.
Richardson in his questions during the second round said the presentation given by the Prime Minister and Minister of TEATT are not conflicting, he said the government is a total failure especially since they do not have a finalized term sheet even though they are discussing loans for PJIAE. Richardson said that St. Maarten signed the worst agreement with the World Bank and the World Bank will be paid over half a million for their services. He considered the government a total failure especially since they are not able to put a loan agreement in order.
MP Brison said that just recently while persons are calling on the people of St. Maarten to unite and asked that Ministers stop their tit for tat. Brison said that while these sentiments are being expressed he said the Minister of TEATT used over 30 minutes of his time to glorify himself. Brison said that the Government of St. Maarten do not have a deal for financing with the Dutch Government. Brison said without a final term sheet then there is no deal. He asked what would the government do in the event the lenders chose to add more conditions to the expected loan.
Brison lambasted the government for not putting the focus on pre-clearance for PJIAE which was approved already. He considered the government’s actions a huge travesty especially since Schipol could not qualify for US pre-clearance. He called on the government to discuss the option of granting PJIAE a letter of guarantee so that they could move forward with the bondholders.
Clearly, the Members of Parliament were frustrated during their presentation in the second round. The leader of the National Alliance and MP Silveria Jacob and others from the NA simply did not ask new questions but instead ask questions rhetorically.
MP Chacho Peterson said he wants the answers to the questions he posed in the first round. Peterson also informed the chairlady of parliament that he wanted the answers to his question prior to the meeting being adjourned.
MP Peterson then posed other questions regarding incoming flights prior to IRMA and the figures o passengers arrivals.

FINAL: Draft Motion
The Parliament of Sint Maarten in its meeting of today, February 4, 2019

• That the present coalition government of Sint Maarten, led by Prime Minister Leona Marlin is based on a coalition agreement with the premise of transparency, social dialogue, openness, integrity, and communication with a concentrated focus on rebuilding a vibrant economy restoring a strong social fabric and promoting a resilient sense of community;
• That this Government led by Prime Minister Leona Marlin has failed to live up to the abovementioned premise;
• The failure of the Prime Minister Leona Marlin to act timely upon the request by the Airport for a letter of guarantee to secure the necessary financing to rebuild the airport and its facilities;
• That this failure to act has pressured the airport and the government to entertain discussions and conditions for financing which under normal circumstances would not have been entertained;
• That Prime Minister Leona Marlin lacks in transparency, openness, and integrity, which is evident from the fact that the Prime Minister provides information to parliament primarily when called to parliament during meetings requested by opposition parties.
• That Prime Minister Leona Marlin’s ability to lead her cabinet in focusing on rebuilding a vibrant economy is in question when the airport is not given the timely attention when such is requested.
• That Prime Minister Leona Marlin has shown no evidence of results of restoring a strong social fabric and promoting a resilient sense of community;
• That Prime Minister Leona Marlin’s approach to Kingdom Relations does not echo the sentiments and positions taken by her own coalition and could further threaten the autonomous position of Sint Maarten in the Dutch Kingdom;
• That more than a year after the destruction by Hurricane Irma “not a roof has been repaired” with the Dutch Recovery Funds. So stated by the Dutch General Audit Chamber. (Ruim een jaar na de verwoestende orkaan Irma is op Sint Maarten met het Nederlandse geld voor de wederopbouw ‘nog geen dak op het eiland hersteld’. Dat schrijft de Nederlandse Algemene Rekenkamer”.
• Shared concerns by coalition partner Wescott Williams as reflected in the headline in today’s daily paper of a press release issued by the President of Parliament Wescot-Williams: “Time to Objectively Evaluate World Bank Program and Bottlenecks”

That Prime Minister Leona Marlin has failed to lead her cabinet and by extension Sint Maarten to execute the very same objectives that form the premise of this coalition government.

RESOLVES:
That Prime Minister Leona Marlin no longer enjoys the confidence of the Parliament of Sint Maarten and seeks her immediate discharge as Prime Minister and Minister of General Affairs.

And goes over to the order of the day.

Copies of this motion to be sent to: