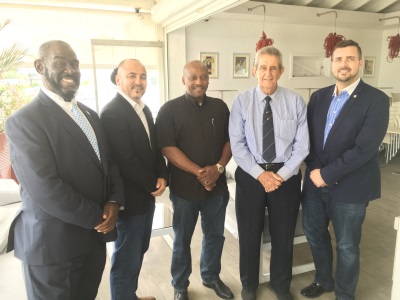 SIMPSON BAY:--- The retired Managing Director of the Princess Juliana International Airport Holding Company N.V. (PJIAH), Joe Peterson took center stage at a merited farewell luncheon at the IZI restaurant on Friday, August 2, 2019. Peterson officially retired two years ago as the official decision maker of the PJIAH. On August 1, 2017, past member of the PJIAH Supervisory Board of Directors, Dexter Doncher was officially appointed as his successor.
His longstanding career resulted in 18 years of service at the airport, notwithstanding his term as a member of the Supervisory Board of Directors, as lead by the former chairman, the late Max Pandt.
Joe Peterson reminisced about his accomplishments and rewarding journey at the helm of the holding company during a private event which included his wife, Charlotte Peterson – van Viegen, the honorable Minister of TEATT, Stuart Johnson, Chairman of the Supervisory Board of Directors, Michel Hodge, the Management Board of PJIAE and close friends. At the close of the luncheon, he was awarded tokens of appreciation for his years of service from the Minister of TEATT and PJIAH.
“When our citizens dedicate their lives to the development of our country, it is always sad to see them leave companies or organizations they’ve helped build. Joe Peterson will be genuinely missed, as he dedicated a large portion of his adult life to the growth and development of Princess Juliana International Airport. I want to say success, Joe, in the next chapter of your life. As Managing Director of the Princess Juliana International Airport Holding Company N.V., you provided us with exceptional service and leadership. Therefore, on behalf of the Government of St. Maarten and a grateful nation, I salute you,” announced Honorable Minister of TEATT, Stuart Johnson. 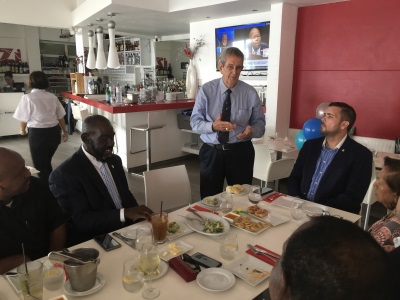 “The major part of my life involves the airport because my father was an operator at the Princess Juliana International Airport. I can recall teaching my sister to ride a bicycle on the old runway, as there was sometimes one flight a week back then,” Peterson told the invitees.
“Relationships made with HBN Law was crucial, as I learned a lot from its team and put it to good use at the airport. Today I can undoubtedly say that those teachings served as some of my high points during my tenure,” Peterson added.
“Dexter Doncher is not in a good position to take his role lightly. I wish him much courage, perseverance, and strength to bounce back from this very difficult time after hurricane Irma. I’m also hurt by the slow pace of the reconstruction of the airport and will remain just a phone call away to lend any assistance to my second home,” concluded the outgoing Managing Director of the PJIAH.