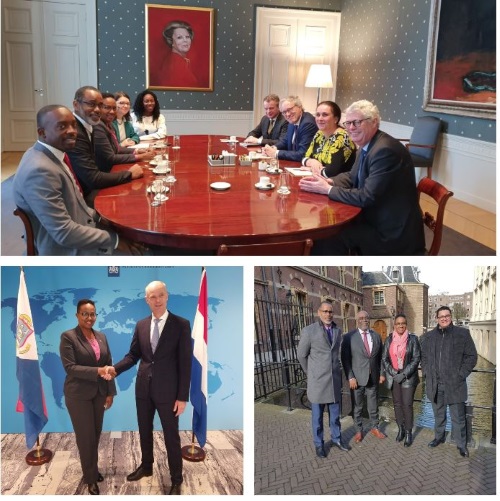 THE HAGUE/ PHILIPSBURG:--- This week the St. Maarten delegation, consisting of Prime Minister Silveria Jacobs, Minister of Finance Ardwell Irion, and their advisory staff are in the Netherlands taking part in several meetings.

“We are here to make connections aimed at improving the working relationship within the Dutch Kingdom based upon mutual respect and understanding in the best interest of the people of St. Maarten, stated Prime Minister Jacobs.

Prime Minister Jacobs stated that meetings were held on a technical level with technical representatives from the Ministry of Interior Affairs and Kingdom Relations (BZK). Additionally, the St. Maarten delegation met with the Minister of Interior Affairs and Kingdom Relations, Raymond Knops. In-depth discussions were held between both parties pertaining to the 2018 and 2019 liquidity support. More specifically, St. Maarten’s position regarding the conditionality of pension reform, to acquire liquidity support for 2019 and the remainder of liquidity support for 2018, was shared.

“We’ve shared with Minister Knops, that we find it very unreasonable that pension reform is a condition for liquidity support as this topic is an extremely sensitive topic all over the world. Additionally, it is also clear that the people of St. Maarten, including the unions and the members of parliament still have great concerns where the draft pension reform law is concerned.” Prime Minister Jacobs stated.

The St. Maarten delegation also met with the Minister of Foreign Affairs Stef Blok, to discuss research related to visum policies in the Caribbean. They also met with our Dutch Caribbean counterparts in that context in preparation for this discussion in the Kingdom Council of Ministers. Additionally, the St. Maarten delegation paid a courtesy visit to the representative of St. Maarten Mrs. Maria van der Sluijs-Plantz and support staff. Courtesy visits were also paid to the Vice-President of the Council of State Thom de Graaf, Chairman of the Second Chamber Jan Anthonie Bruijn, as well as the Chairman of the Committee for Kingdom Relations of the Second Chamber of the Dutch Parliament Jan Paternotte. During these visits, the delegation touched on the dispute regulation for St. Maarten.
“In these meetings, St. Maarten saw communication, representation and her input in decisions related to St. Maarten. Ways in which these may be improved is also being highlighted. The delegation is working towards making sure St. Maarten’s voice is heard in the plenary sessions of the First Chamber as it pertains to the discussions on the dispute regulation,” said Prime Minister Jacobs.