~ Unions will be incorporated on how to cut civil servants salaries.~

PHILIPSBURG:--- Prime Minister Silveria Jacobs announced at the weekly press briefing that the government of St. Maarten have accepted the conditions set down by the Kingdom Council (Dutch Government) in order for St. Maarten to receive the loan they requested from the Kingdom to assist its people during the global pandemic of COVID-19.
Jacobs said that the country informed the Kingdom that the government accepts the condition as long as it does not trample on the other laws that guide the country.
Jacobs said the decisions taken by the government was done in the best interest of its people in mind, especially since the COVID-19 pandemic that affects everyone and every country.
Jacobs further explained that several of the conditions were already being implemented by the government of St. Maarten, for example, the cuts on the salaries of Ministers and Members of Parliament. Jacobs said that the Dutch Government wants a 25% cut from politicians but based on the cuts made by the government comes up to 26%.
As for the unions and if they are now on board, Jacobs said the government tried their best during their negotiations not to touch the salaries of civil servants that are earning NAF4,000.00 and under, however, the Dutch Government wants the cuts all across the board. Jacobs said that these conditions have to be implemented by July 1st, therefore, it’s the intention to involve the unions when deciding how the cuts will be implemented to meet the 12.5%.
Jacobs said the government still does not want to cut the salaries of civil servants that earn NAF 4, 000.00 and under. 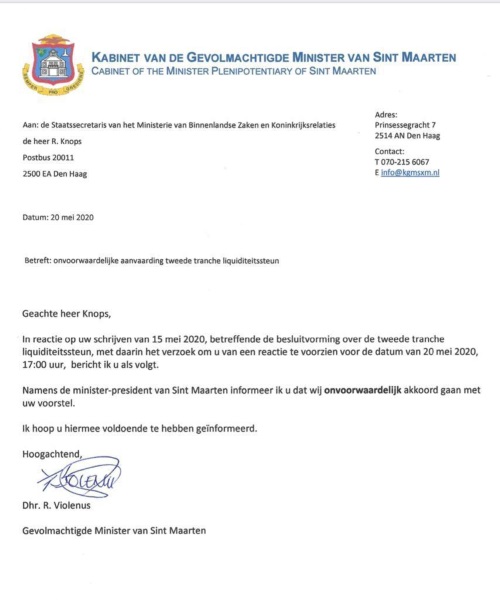