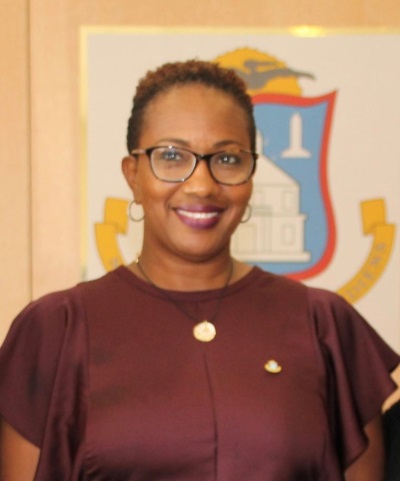 PHILIPSBURG:--- Prime Minister Silveria Jacobs announced on Wednesday Council of Ministers press briefing that she will be meeting with the French counterparts on Thursday to further discuss the border controls that have been extended to October 1st, 2020.
Prime Minister Jacobs said she along with other members of the Council of Ministers attended the protest march on Wednesday morning that was organized by the Soualiga United Movement.
Jacobs said despite trying to convince the Préfet Délégué Sylvie Feucher how discomforting the controls are against the people of St. Maarten/ St. Martin as well as the business community the Préfet Délégué is hell-bent on maintaining the border controls.
Jacobs also extends her gratitude towards the people that showed up on Wednesday morning for the protest march.

Asked if the Dutch side prepared to have a joint command center and use of rapid testing. Jacobs said that the Prefet has been making decisions unilaterally which is impacting the people negatively. Jacobs said that she will be meeting on Thursday with her counterpart and hopefully the requests of the French will be discussed. Jacobs also explained that she has been in contact with the Minister of Overseas Affairs where he highlighted the situation on St. Maarten and the impact the border controls have been having on the people as well as businesses.