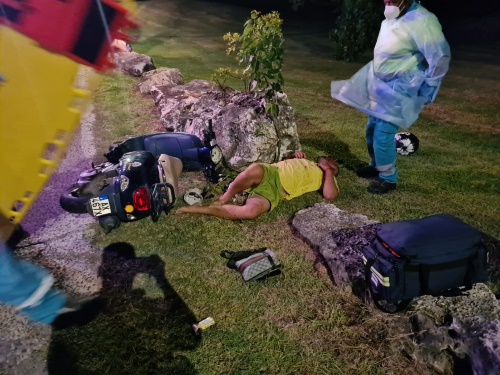 PHILIPSBURG:--- The personnel of the Traffic Department is investigating a serious accident which took place on Tuesday evening November 17th, 2020 around 8:00 pm, on the Rhine Road, whereby a scooter rider was severely injured.

According to the preliminary investigation, the rider with the initials C.M. was traveling in the direction of Cupecoy when for reasons still unknown, lost control and collided with one of the large stones on the side of the road. As a result of the collision, the rider suffered severe lacerations to his face. He was treated at the scene by the personnel of the ambulance and later rushed to Sint Maarten Medical Center(SMMC) for further treatment.

Upon further investigation into what transpired, it was discovered that persons who were on the scene, in an effort to assist the rider, moved him from where he originally landed to the side of the road. They also removed the helmet from his head. The personnel of the Traffic Department is urging persons who may be on the scene of an accident, before emergency personnel, to refrain from tampering with victims if unsure of their medical condition. These actions may result in further injuries that could otherwise be avoided.

The Police Force of Sint Maarten is again cautioning, motorcycle/scooter riders about their behavior in traffic. We will continue to work towards keeping Sint Maarten roads ways safe but it is a job that cannot be done without the help of the community. In many cases, easy safety measures can be taken to prevent unnecessary accidents.