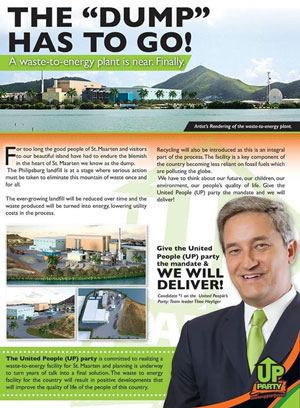 It has come to my attention that in his bid to win re-election Theo Heyliger has promised to deliver a waste to energy plant to Country St.Maarten. In the ad is an artist's rendering showing what the plant will look like when built. All in all a pretty effective ad for something St.Maarten has needed for a long time.

Now I do understand the business of politics and that come election time all politicians will remind voters that it was them or their political party that "brought home the bacon". The only issue I have is that in order to bring home the bacon you must first realize that bacon comes from hogs and you must be willing to go find the hogs or at the very least stop at your local supermarket or butcher to pick up a pound or two. That takes a bit of ambition which despite the high salaries they are paid none of the politicians in St.Maarten seem to have when it comes to the need for sustainable energy. It took me doing the research, finding the company, contacting the company, looking at what they had to offer and determining how it could benefit the island. After all that I still had to practically light a fire under their rear ends in order to get them to move on it.

Now I have been writing about this need for sustainable energy in the local St.Maarten papers starting way back in 2002. The second article I wrote for the Daily Herald was titled
The Winds of Change
Are they blowing in St.Maarten?
This article ran in the business section November 23, 2002. It prompted a good deal of discussion and for many years politicians promised they were doing something about it when it was what they thought the people wanted to hear. The problem is nothing was ever done about it.

The people of the island have suffered needlessly due to the high cost of energy. When GEBE was in the news constantly back in 2011 due to the outrageous bills people had to pay it prompted me to write a second follow up article titled "The Winds of Change- Revisited" which ran on June 29, 2011 and even prompted the editor of the Herald to write an editorial piece about it titled "Sustainable" which also ran on June 29, 2011. Finally I decided to take matters into my own hands so on Thursday July 21, 2011 I called a company in Dallas to inquire if they would have an interest in doing a sustainable energy project in St.Maarten. They did have an interest so after studying the material on August 3, 2011 I made my first contact with then Minister Heyliger. My letter to him as well as his response to me is copied below.

Re: St.Maarten has problems, I have solutions‏
Theo Heyliger

St.Maarten is indeed looking for a solution to our waste challenges. Several years ago we issued a public tender for interested companies. To date we are in negotiations with the proposed finalist. Many studies and negotiations have been done and are continuing.

To the person that does not know better your email gives the impression that you are bringing the holy grail.

I have seen and heard many of the same claims that you are boasting only to have been disappointed in the end.

St.Maarten is seeking a proven system that has been tried and tested. Not one that is in a developmental stage. Building plants and not having existing plants is in my opinion developmental.

Nonetheless, I am still willing to meet with your contacts with a open mind.

Would you be so kind as to provide a webiste or other information that we can continue the research ?

As you have published my emails in the past, please feel free to send my response to whomever you deem necessary.

2011/8/3 Andy Croxall <This email address is being protected from spambots. You need JavaScript enabled to view it.>

As we are both aware, St.Maarten is currently experiencing some major problems, the high cost of electricity, the overflowing landfill, the damaged cruise pier and a lack of funds needed to deal with these problems.

A few weeks ago in an effort to develop a solution to the GEBE problem I reached out to a contact of mine here in the States to see if his company would have any interest in doing a wind energy project down there. During the course of our conversation he told me that in addition to wind turbines his company could also provide a waste-to-energy plant which, with an annual volume of 100,000 tons of waste would produce 15 MW of electricity.

I know you have looked into building a waste-to-energy plant on Pond Island in the past, so I pursued this with him. His company would provide all needed development capital and financing for this project. St.Maarten will not need to contribute any equity for the project. This company's projects are totally self financed. In addition, a plant of this type would result in a net reduction of 95,000 tons of greenhouse gasses. These carbon credits would be retained by St.Maarten and can be sold for approximately $30.00 per ton amounting to 2.85 million per year in income.

This project would create approximately 100 construction jobs and 15 to 20 permanent "green jobs" in the ongoing operation of the plant. The company will provide all job training and the workforce will be comprised of locals. Every effort would made to hire local help in the construction of the plant as well.

Once construction starts it would take approximately 12 months to complete the plant. The waste-to-energy facilities generate emissions that comply with all U.S. EPA and E.U. standards. The conversion of the waste into electricity is within an enclosed building similar to an industrial warehouse with no adverse odors or noise.

In order to make this happen, the company will need a 20-year firm agreement for a minimum amount of municipal solid waste and sewage sludge. As well as a couple sites with a ground lease to locate the facilities of 5-7 acres per site (one near the land fill and one near the waste water treatment facility, and a 20 year firm priced power purchase agreement.

From what I can determine this company can offer St.Maarten an environmentally friendly, turnkey solution to; the GEBE problem, the landfill problem, the cruise pier problem (income generated by this project can pay for the pier repairs), and the as yet to be created problem of what to do with the sludge from the wastewater treatment plant. All with no investment of money required by St.Maarten.

The company has plans to begin construction of two plants this fall, one in the US and one in the Caribbean. St.Maarten could be number three.

There are some other income streams involved that can be discussed once the project has been evaluated in more detail. If you have an interest in discussing this further I can be reached at 330-835-9648 before noon everyday.

As you can see from his reply Theo was quite wary of me from the start which given our past history was not unexpected on my part however we got over it and things moved forward.

Knowing St.Maarten politics the way I do I did not want to see this project turned into a political football due to the huge upside potential to the people of the Island so I also contacted William Marlin then in the opposition benches as well as Kendall Dupersoy and let them know what was being proposed. In fact I actually contacted Kendall a few days prior to approaching Theo. St.Maarten politics being what they are this proved to be a wise move since the first government fell and William replaced Theo as the point man on the project with Kendall serving as his advisor. This allowed for a transition with a much shorter learning curve since they already had knowledge of the project from the start.

William's turn at the helm narrowed the field to four potential companies before the collapse of the second government.

Maurice Lake became the next minister in charge of VROMI and has recently announced the company selected to do the project is the same company (Synergy) who I initially put Theo in touch with.

That is the short version of the long history of this project. I don't think the voters really care who brought home the bacon just so it costs them less in electric bills to fry it up when they get it home.
Note: During this project I was also in contact with Jadira Veen as well as Bibi Shaw so they had knowledge as well as to what I was trying to make happen here in addition to the aforementioned Politicians. I just want the people of the island to know the whole truth as to who did what before heading to the polls on Friday. I'll be sitting here in Akron, Ohio waiting to hear the results. Now get out and vote. If you don't vote don't complain for the next four years. I will be happy to answer any questions anyone has about this.