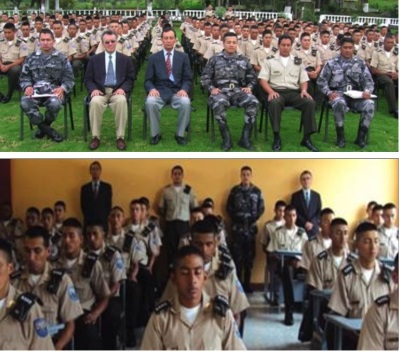 Terrorism has taken a disturbing turn with the horrific murder of journalist Jamal Khashoggi. Apparently, the intent of this murder was to send a message to all journalists dedicated to thoughtful criticism of government. Therefore, what would be the most appropriate journalistic response to such blatant censorship? Is it to continue to report in good conscience, and risk brutal death? Or is it to step away from any controversial reporting and deny the truth to those who need to hear it?

There is yet a third response, one which carries no risk to those reporting it. That response would be to publicize a little-known means of ending all war and terrorism once and for all: Invincible Defense Technology (IDT).

Throughout time, militaries have sought to achieve invincibility by applying ever-advancing technologies. History shows they have so far been unsuccessful. Adversaries inevitably devise methods to counter any system of offense or defense. However, there is a scientific, military field-tested solution which has arisen from the latest discoveries in the Unified Field theories of physics, neuroscience, and the social sciences--not from approaches utilizing weaponry, and not from the field of politics.

Invincible Defense Technology: A Non-Religious, Humane and Beneficial Approach
The practical components of IDT are the non-religious Transcendental Meditation (TM) and the more advanced TM-Sidhi programs. When large groups of experts practice these programs together, a powerful field effect of coherence and peace is generated that spills over into the surrounding population. This effect has been shown in extensive scientific research that has repeatedly confirmed measurable decreases in war deaths, terrorism, and crime. Studies have also shown, for example, reductions in verbal hostilities and hostile acts, increased number of cooperative events, and other improvements in quality of life such as reduced accidents, hospital admissions, and infant mortality. These are all tangible signs of reduction of societal stress. Due to this research the non-profit organization Global Union of Scientists for Peace (GUSP) advocates this simple and cost-effective approach for reducing social stress (see: https://www.gusp.org/global-peace-summit).

Large Groups of IDT Experts Defuse Collective Stress,
Create Prosperity, Economic Growth, and Peace for All
In highly stressed areas of the globe, establishment of large groups of experts practicing IDT has led to increased prosperity and economic growth, including a decrease in the "misery index," an indicator of socioeconomic stress, and a significant increase in competitive growth. These positive changes in social trends have occurred concomitant with implementation of IDT approaches. This coherence-creating effect was documented on a global scale in a study published in the Journal of Offender Rehabilitation. When large assemblies of civilian IDT experts gathered during the years 1983-1985, terrorism-related casualties decreased 72%, international conflict decreased 32%, and overall violence was reduced in nations without intrusion by other governments (summaries of this research are available at: https://davidleffler.com/2011/sapratableii). Due to these positive changes, militaries in South America and Africa are now actively field-testing this approach. They have already established IDT Prevention Wings of the Military to reduce crime, quell violence, create prosperity, prevent the rise of enemies, and create the conditions for lasting peace.
Invincible Defense Technology is Cost-Effective
For about the cost of a few modern fighter jets, any military could establish a group of 15,000 warriors trained in this advanced IDT approach. This Prevention Wing of the Military would practice IDT programs twice a day in large groups, which would defuse social tensions not only in their country but also globally. Studies indicate that, once such a program becomes operational, societal conditions in their country and other countries worldwide will immediately improve. The collective consciousness of all populations will rise through the influence of greater harmony and peace. Better solutions will occur to the people and their leaders for improving their own living conditions. Those who have engaged in violence will no longer do so. Studies have shown repeatedly that this method works--and will continue to work as long as the peace-creating group is maintained.
Implementation
The quickest and most effective way to implement this alternative would be for heads of states to issue an order to their militaries to deploy this new method. Once successfully implemented, a social phase transition would immediately begin in which the high societal stress which globally fuels crime, poverty, terrorism, and war would be alleviated. By greatly dissipating these formerly intractable problems nationally and globally, these heads of states would thereby be celebrated as great humanitarians and examples of global leadership.
Nothing Else has Worked.
Given the many approaches previously tried by world leaders that have not worked, including many inhumane actions, it is certainly worth giving this benevolent approach a try. It is simple, inexpensive, and has a track record of high success. Any country large or small could become the global leader of this cutting-edge brain-based technology. With IDT, their country would become invincible, they would be creating lasting peace worldwide, and their military would be globally respected and admired.
It’s Time for Journalists to Advocate Something New and Proven
Journalists have a responsibility to bring truth to the people; in their unique position they also have the capability to enlist the media in creating a better world for all. Here is an opportunity to ensure that Jamal Khashoggi and all others who have stood up for the truth have not died in vain.
About the Authors:
Arlene J. Schar is the Executive Assistant at the Center for Advanced Military Science (CAMS). Her husband Dr. David Leffler served as an Associate of the Proteus Management Group at the Center for Strategic Leadership, US Army War College. Currently, he serves as the Executive Director at CAMS (http://www.StrongMilitary.org).