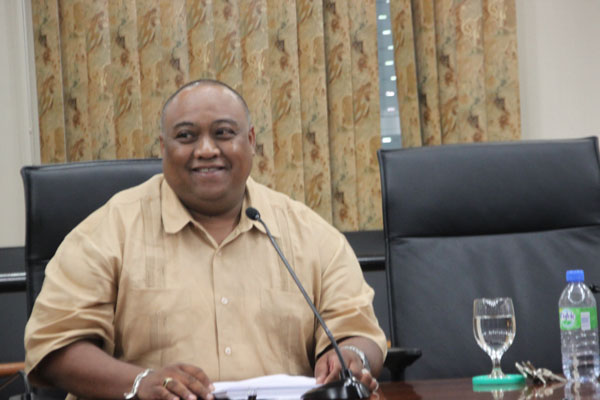 Philipsburg:--- The former appointed Minister of Finance and son in law of the Minister of Justice Hiro Shigemoto was arrested around 10am on Monday morning, confirmed Chief Prosecutor Hans Mos. Shigemoto was arrested at his home in Pointe Blanche. Mos said Shigemoto is suspected of committing fraud when he paid Global Advisory Services double for services the company provided to the Government of St. Maarten.

Global Advisory Services is owned and managed by Roberto Gibbs who is also the Co-Manager of WINAIR. The company was hired to recruit people for the Tax Department and the company was paid double for the services they provided when finding manpower outside of St. Maarten.

Ten days ago the Landsrecherché arrested Roberto Gibbs, he was later released by the Judge of Instruction when the Prosecutor's Office requested his second eight day pre-trial detention.

When Roberto Gibbs was arrested, SMN News gave indications in its reports that the Piranha (the biting fish) investigation started in 2010 when Bas Roorda was fired by the UP/DP Government. Bas Roorda, the former Head of Finance, was brought to St. Maarten by the National Alliance/Heyliger Government who took over when the Democratic Party Government fell. The commissioner of Finance Xavier Blackman recruited Roorda from the Netherlands to head the finance department since according to Blackman back then the department was in shambles. The UP/DP coalition fired Roorda when he turned over incriminating information to the Prosecutor's office that incriminated several persons including former commissioners. Two people that made headlines for pocketing government monies was the former Head of the Tourism Bureau, Regina Labega and former Commissioner of Tourism and Economic Affairs (now Member of Parliament) Frans Richardson. At the time Roorda was made director of the department of finance, Hiro Shigemoto was not too pleased because he was not given the post. Sources within government said that Shigemoto did not apply for the position because he felt that he did the job for years and he deserved it without following basic procedures, therefore he made Roorda's life a living hell and was not cooperating with him.

While it is clear that the Prosecutor's Office (Landsrecherché) is busy investigating the Roorda spiral because of what is termed as "so-called" injustice to a Dutch citizen, there are several cases that are lying on the desk of the Landsrecherché and they are not being touched. One such case is the Election Fraud case that involves three police officers and a civil servant working at the Philipsburg Police Station and the United Peoples Party leader Theodore Heyliger. SMN News has been reliably informed that all four persons at the Philipsburg Police station gave sworn statements to the Police Internal Affairs that they accepted monies from the UP leader in exchange for their votes, yet the Landsrecherché does not see this case as being a priority case.

A political pundit said that the investigation was delayed because of political rhetoric since the Minister of Justice Roland Duncan was appointed by Independent Member of Parliament Patrick Illidge who supported the UP/DP Government.

On Monday, SMN News contacted Chief Prosecutor Hans Mos for an update on the Election Fraud case that has been pending some two and half years now and Mos said the case is still on the shelves. The island's Chief Prosecutor claimed that the Landsrecherché is short staffed even though they got nine officers from the Police Department. Another case that also remains untouched is the one involving former Minister of Health and Labour Maria Buncamper-Molanus who was forced to resigned after she sold the economic rights for government lease land.