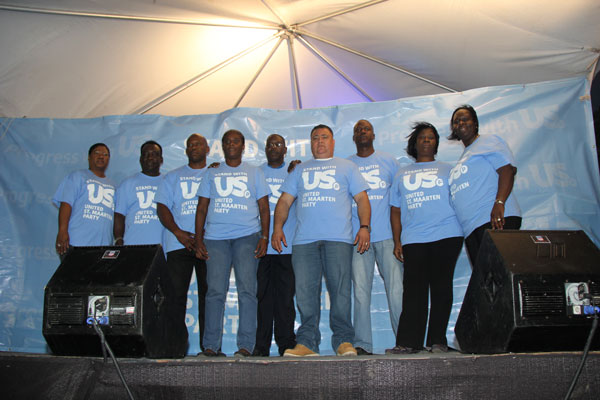 CUL DE SAC:--- Member of Parliament Frans Richardson and his supporters created a new atmosphere in the St. Peters area on Sunday afternoon when MP Richardson launched his political party that will be contesting the 2014 elections. The gathering which amounted to just over 350 people with lots of children began gathering just after 2pm on the De Weever's property where tents were set up for the Sunday afternoon event. MP Richardson wrote a new chapter in his political career on December 22nd, 2013 when he official branched off from the National Alliance where he began his political life and launched his own political party.

The US crew hired several bands for the launching of the new political party, some of which included Rohie Rhythm Band, Impact Band, Percy Rankin, Red Eye Crew, and Tripple Kay. Each of the bands played for 45 minutes prior to the official launching.

As the people gathered there were young men and women taking surveys from those that attended the launching, questions such as how they heard of the launching and what they believe should happen in the next governing term were some of the questions on the questionnaire. Besides the music and lots of beverages for the attendees, the UP crew came out with something more for their supporters. They distributed tickets to everyone that attended the event which allowed them to win food baskets for the Christmas holidays and kids tablets especially for the youths that won a prize.

MP Frans Richardson along with his family and friends arrived at the location around 3pm decked in a white t-shirt. Even his children and wife wore the white to show they came from the "white" party and are now moving to another level. Just after sunset MP Frans Richardson went on stage dressed in an aqua blue t-shirt with the words "Stand with US-P, United St. Maarten Party" where he introduced the members of the USP board.

MP Richardson said in his opening remarks that there comes a time in one's life when they must react one way or the other especially towards development, issues concerns and questions which keep their minds busy especially when someone chose to serve their country and people by taking up public office.

He further stated that him being such a person for quite some time now , "this is the time that I along with others were forced to take a long and hard look at where we are as a people and where we want to go from here. It's the time we all had to look in the mirror and decide to correct the mistakes of the past by pooling our resources and committing ourselves to a new way of doing things."

The leader of the US party said that the founders of his party believed that the time is right and the time is now for them to take this initiative considering how much more needs to be achieved as a young country.

"With those things in mind the founders chose to name the new political party "United St. Maarten Party" (USP), which is in keeping with their core beliefs of building from the bottom to the top recognizing the resilience as a people and the many characteristics and shared history that binds "US" as a people."

The USP leader called on the people to stand with them and to join the US because the members of the board have a proven track record and they want to serve and not to be served.

"The USP recognizes the disappointments and disinterest among so many of you, after all, many promises were made and have not been lived up to while some situations only worsened."

The President of the USP also called on the people to join hands with them as they move towards a change for St. Maarten.