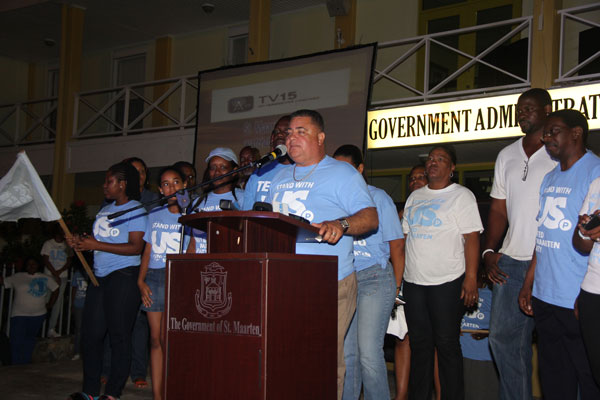 PHILIPSBURG:--- The United Peoples Party got a resounding amount of votes from the voting population on Friday. The massive campaign paid off for the UPP but UPP will not be part of the next government as coalition talks just started with the National Alliance (NA), United St. Maarten Peoples Party (USp) and the Democratic Party (DP) Before daybreak on Saturday morning the the leaders signed a working document confirming that they will work together to form the next government.
The UPP received 6156 votes which gave the UPP six seats plus one residual seat making it seven seats for the UPP, the National Alliance got four seats (4011), a major loss of votes compared to the 2010 elections. The USp got one seat outright plus one residual seat giving the USp two seats (1636) while the Democratic Party secured two seats (2398). The OSPP (168) and SRP (131) did not obtain any seats in parliament.
Based the results seen thus far all three of the political parties including their leaders lost a considerable amount of votes. However, the individual votes will only be available Saturday or Sunday afternoon.
Parliament will see a number of new faces on October 10th, 2014.

Those that secured a seat on the UPP list are:- 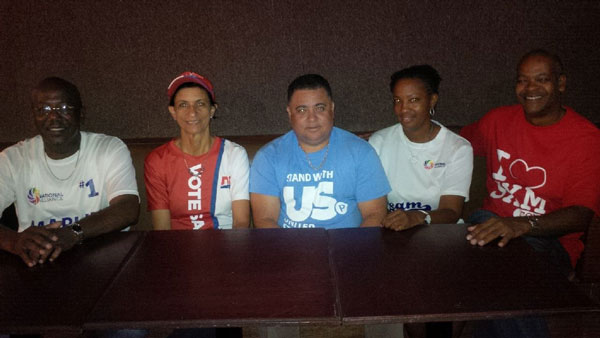 The final preliminary results for the 2014 Parliamentary Elections came in after 4am Saturday morning. Leader of the USp Frans Richardson and his team was the only political party that came to the Government Administration Building to address the people. Richardson made clear that what happened during the last four years will not happen again, he said that he is open for discussions with any of the three other parties that obtained seats but he made clear that the incoming government will not be about projects, instead it will be about the people of St. Maarten that have a number of social issues to deal with.
Richardson said that it is clear that the electorate did not want any one party to run the government. 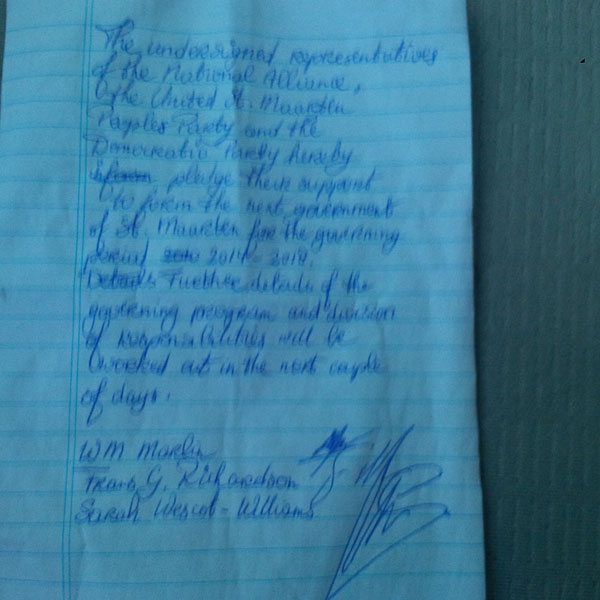 Richardson said even though the campaign was long and the night was long he was prepared to start discussions immediately to form the next government. The people he said elected gate keepers and his team are ready to work for the people of St. Maarten.

While UPP got the majority of the seats they did not show up to deliver a victory speech or to even address the voters of St. Maarten Saturday morning. It is understood that the UPP and its supporters were celebrating elsewhere.
The other political parties National Alliance and the Democratic Party also did not show up at the Government Administration Building (the main voting Bureau).

SMN News managed to confirm that the National Alliance, United St. Maarten Party and the Democratic Party signed a document before 6am Saturday confirming their committment to work together and form the next government. With this new information it can be concluded that the UPP will be sitting on the opposition benches.