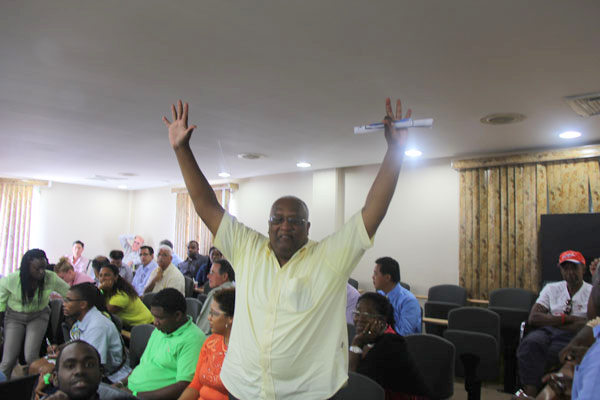 PHILIPSBURG:--- The Chairman of the Central Voting Bureau denied most of the requests submitted to him to do a total recount of all the votes. Leader of the Social Reform Party Jacinto Mock submitted a written request stating that the Central Voting Bureau did not visit all 20 polling stations, that all voters did not receive their voting cards and that some voters did not speak the English language. Chairman of the Voting Bureau Jason Rogers denied Mock's request stating that his request did not have any merits and that Mock did not present facts to substantiate his case. Rogers clarified that the Central Voting Bureau did visit all the polling stations and that they were in constant contact with each of the polling stations throughout the day on Friday (Election Day).
Johan Janchi Leonard and Claret Conner also submitted a request for a total recount claiming that they needed to verify if the amount of votes they received were correct since some of them got two and three votes less than others on their list and this of course will put some the UPP in a precarious position in deciding which of the candidates were elected by the people to Parliament. Rogers also denied the requests submitted by Leonard and Conner stating that the small margin does not indicate that something went wrong with the voting and counting of the votes. He also stated that none of the candidates objected to the process verbal which also indicated that there was no reason given that would create doubts.
Other persons that asked for a total recount were James Rosen, Shridath Brijlani, Nadia de Windt and Ogando Octavio. The chairman also denied the request submitted by the four candidates. However, he upheld the request submitted by Tatiana Arrindell who asked that the invalid votes be re-examined.
Prior to examining the invalid votes the chairman informed the audience that he would have to open the suitcase for district 7 because the invalid votes were not separated.
As the Central Voting Bureau began examining the invalid votes it was clear that a number of voters were upset as many of them used the red pencil and marked off all six of the political lists on the ballots. One voter went as far as tearing the ballots several places, another voter wrote the words "U F—kers".
District number 8 (The St. Maarten Academy) submitted their count with 60 invalid votes, the largest of all the districts, it turned out that of the 60 ballots that were counted as invalid 51 of them were valid votes of which 29 went to the UPP, 17 to NA, 4 to the USp and 1 to DP. At the end Rogers announced that at district 8 there were 9 invalid votes and not 60 as announced in the preliminary results early Saturday morning.
At the A.C. Wathey Legislative Hall there was much anxiety since one and two votes made a huge difference among some candidates on the UPP slate. One of those candidates was the number 7 candidate on the UPP slate Johan Janchi Leonard who needed two valid votes to make him eligible for Member of Parliament. Leonard had a number of persons who voted for him but those ballots were in fact invalid votes, he was lucky by obtaining two extra valid votes which placed in a "tie" position with Maria Buncamper Molanus. When Leonard got those two votes which gave him preference as to who will become MP he jumped out of his seat in joy because it clearly placed Leonard ahead of Maria Buncamper-Molanus. The Electoral Law states when there is a tie in votes the candidate that is higher up on the slate gets preference. Based on article 100 sub-2  of the electoral law, depending on the placement on the list the person gets the preference as to who got elected.
Several persons in the audience were making their thoughts known especially those from the UPP who wanted a total recount of the votes. Despite the little uproar the Chairman of the Voting Bureau did not change his decision instead he continued with verifying the invalid votes. In several of the other districts votes that were counted as invalid turned out to be valid votes. The official results of the recount will be posted under this article.

Click here to view the results after recounting the invalid votes.

Click here to view photos of the invalid votes recount.