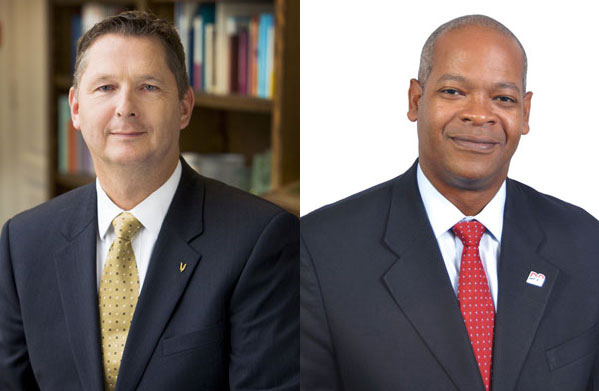 PHILIPSBURG:--- Attorney at Law Jairo Bloem has issued a summons to Dutch MP Andre Bosman to issue an apology to his client MP/Minister Cornelius de Weever by Monday November 17th, 2014 or face a court injunction.
In a letter sent to MP Bosman dated November 10th 2014, Bloem stated that MP Bosman made erroneous, slanderous and defaming statements against his client MP De Weever shortly after MP De Weever abandoned the NA/DP/USp coalition and formed a government with the UPP.
Bloem said on October 22nd, 2014 an article was published in the Amigoe newspaper in Curacao stating that you received the open letter of client and first wanted to discuss the content thereof within your party. You were next quoted as follows:
"Maar het feit dat ze me de mond proberen te snoeren is misschien een indicatie dat ik op de juiste weg ben...."
The published article states that you referred to a declaration of the State Council Member of Sint Maarten, hon. Mr. Christopher Emmanuel that even he was offered 2 million dollars to go independent as a State Council Member. Furthermore you were quoted stating: "ze kunnen dus heel erg boos worden als wij iets zeggen in Nederland, maar het klopt dus blijkbaar wel."
Other newspapers subsequently published same and/or similar statements made by your person.
Today, marks the 32nd day after my client sent out the open letter inviting you to do the honorable thing and address your erroneous and defaming remarks. Exactly 42 days have elapsed since these disputed statements were made and 19 days since you stated that you wanted to first confer with(in) your party, apparently in order to adopt a standpoint.
Your sudden incapability or difficulty in formulating a prompt response stands out in dire contrast to the rapidness wherein you are always seemingly capable of drawing conclusions and relating same to the media, often without any –adequate- due diligence and fact finding.
The contention made by you that you must now all of a sudden confer with your party before responding makes client wonder whether or not you also discussed your first defaming statements with your party before making them. Needless to say that this could result in your party also being liable next to you in this matter.

You are hereby requested and insofar as is legally necessary summoned to inform client on or before November 17th, 2014, at 17:00 hours St. Maarten time:

These last statements are also defamatory and as such tortious. They furthermore unnecessarily add insult to injury.
You are responsible for your continued unfounded and derogatory statements and as such liable for the monetary equivalent of all damages suffered by client in this matter.