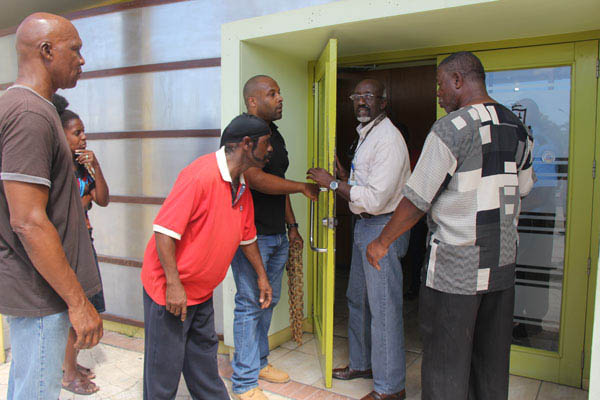 PHILIPSBURG:--- Heavy equipment’s were used early Wednesday morning to block the entrance of the Government Administration Building. The drivers of three heavy equipment arrived in the area of the Government Administration Building shortly before 5am where they parked their vehicles blocking the entrance towards the Government Administration Building and left.
Around 6:30 am the night watch- commander Officer Gomes along with some police officers walked towards the Government Administration and began questioning bystanders and the security guards as to who parked the heavy equipment’s that were blocking the streets. It should be noted that when the heavy equipment’s arrived at the Government Administration Building the night watch commander and his officers were on duty some of whom saw when the vehicles parked up and the drivers left the area, yet they chose to wait until daylight to come outside to ask persons in the area who parked the vehicles in the middle of the road blocking the traffic in that immediate area.
The silent and peaceful protest was organized by citizens that are upset and even disgusted that the Council of Ministers who got a motion of no confidence but refused to make their positions available and are not respecting the country’s constitution. The protesters said they wanted to send a clear message to the Gumbs cabinet and to personally inform the Prime Minister that he ought to respect the country’s constitution.
During the early morning hours the gathering was rather small as most people did not know exactly when the protest would have started. As the day progressed some more persons joined the group of people that stood across the street from the government building waiting for the Prime Minister and other Ministers in order to personally inform them that they need to respect the country’s constitution and the governor of St. Maarten. Among those that gathered in front of the Government Administration Building is the Deputy Leader of the National Alliance and Member of Parliament Silveria Jacobs. MP Jacobs told SMN News that it is a sad day for St. Maarten when its people have to protest in order for democracy to prevail. She said the Gumbs cabinet got a motion of no confidence and they need to respect the laws of the country and the Governor of St. Maarten. MP Jacobs made clear that whatever deals or decisions taken by the ousted cabinet after September 30th 2015 each Minister will be held personally liable for their actions.
Member of Parliament Frans Richardson who also showed up to show his support to the protestors said that he is not at all disappointed in the amount of people that came out on Wednesday. He said as far he is concerned when one person protest it already give reason for them to stand by that person. MP Frans Richardson that those that came out are fed up with the group of rogue Ministers that are holding the country hostage. 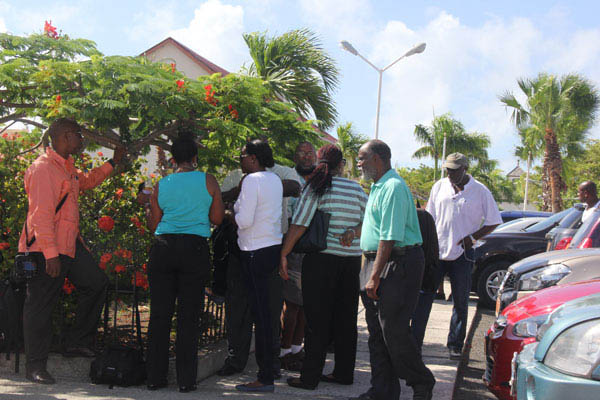 Click here to view photos of the protest action on Wednesday.