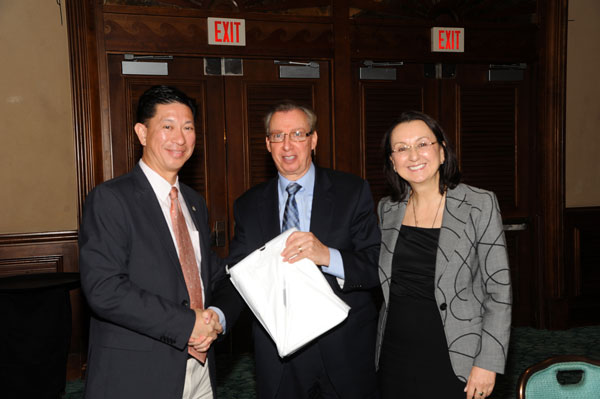 PHILIPSBURG:--- During the Caribbean Travel Marketplace, which is the Caribbean's largest and most important marketing event, Minister Lee’s hard work and contributions were recognized and shown appreciation for as former President of the Caribbean Hotel and Tourism Association (CHTA). This event took place on January 21st-23rd in the Bahamas, of which Minister Lee took vacation days and paid for all travel expenses himself in order to attend. It was his opportunity to say good bye in a respectful manner as the Minister had to abruptly resign due to taking office as the Minister of Public Health, Social Development, and Labor (VSA).

While at the event, Minister Lee took the opportunity to engage in discussions with the Caribbean Tourism Organization (CTO), the Caribbean Public Health Agency (CARPHA), and CHTA on the Zika virus. Discussions involved ways to share best and worst practices, aggressive vector control programs for hotels and Governments, monitoring the impact the virus will have on the economy across the region, as well as prevention and control measures for visitors and the general population. A recent initiative that has stemmed from this regional cooperation is a webinar session hosted by CHTA, CTO, and CARPHA on January 28th at 11:00am.