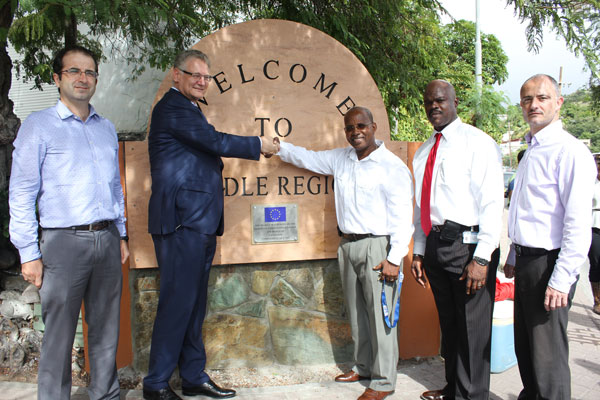 PHILIPSBURG:--- The European Union and Sint Maarten have over the years enjoyed cooperation in a number of development areas. The Head of Delegation of the European Union to Guyana, Suriname, Trinidad and Tobago and the Dutch Overseas Countries and Territories, Ambassador Jernej Videtič, was on Sint Maarten earlier this week to get a firsthand update on the progress of the EU funded programmes.

Ambassador Videtič met with Prime Minister, Honorable William Marlin, in discussions related to the EU's development assistance programmes in Sint Maarten and the Caribbean OCTs regional program. Under the 11th European Development Fund [EDF] Sint Maarten has been allocated EUR 7 Million, which focusses on the securing of water and sanitation. Euro 4.75 Million under the 10th EDF contributed to a project for the upgrading of the sewage, drainage, drinking water and road infrastructure in Dutch Quarter. Sint Maarten is managing on behalf of the Caribbean OCT’s, 40 Million Euro regional program on Marine Biodiversity and access to Sustainable Energy.

During his visit Ambassador Jernej Videtič met with Dutch representatives and French administrative authorities and conducted site visits in the Middle and Dutch Quarter regions. He ended his tour of Sint Maarten by unveiling a plaque commemorating 9th EDF projects in Middle Region that contributed over 4 Million Euro to improve access to sanitation.