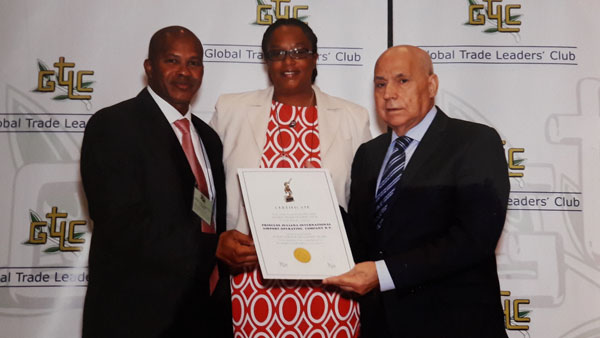 SIMPSON BAY:--- The Princess Juliana International Airport, SXM, has added a second International Travel Award to its trophy shelf.
Ms. Michael Lake, Director Finance Division and Mr. Lloyd Hinds, Director Air Traffic Services earlier this month accepted the award on behalf of SXM Airport.
SXM first received this recognition in 2013.
The recipients of the annual award are selected based on recommendations by members of the Global Trade Leaders’ Club with headquarters in Madrid, Spain. The award is a recognition of the quality and excellence of the service of those companies that have been chosen to receive them and of the work of their leaders.
The Global Trade Leaders’ Club is an organization of businessmen and women that brings together over 7,000 members from 95 countries worldwide who are leaders of big and medium sized companies in all sectors and activities all of whom are major users of transport and related companies.
“We are very honoured to have been chosen to receive this award for the second time,” said Larry Donker, SXM Airport’s deputy managing director.
“We consider it a tribute to the consistent hard work and dedication of our entire staff in providing efficient service that has made us stand out as a leader in aviation in the region,” Donker added.