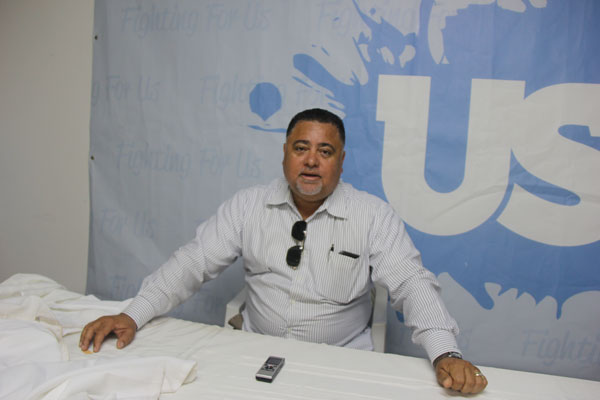 PHILIPSBURG: --- The leader of the United Saint Maarten’s People Party (USP) Frans Richardson already filed an injunction at the Court of First Instance since last Thursday to contest the decision the voting bureau has taken to remove his number 15 candidate from the list.
In an interview with SMN News on Friday morning Richardson said that the Voting Bureau gives political parties 3 days to correct all mistakes that are found on the lists submitted on postulation day. He said indeed, on postulation day his party submitted a list with Curtis Thomas as their number 15th candidate but Thomas he said was off island and could not sign his declaration on time, therefore the party chose to replace him with Dennis Williams who signed all the necessary documents, but the only error his party made was not to change the name on the list before it was presented. Richardson said that correction was made within the three day period and it was submitted to the Voting Bureau within the three day period. He said that his team was in contact with the voting bureau constantly and they pointed out to the members of the voting bureau that it is clear there was a clerical error on the list and they did submit all supporting documents to show that the candidate that was suppose be on the list is Dennis Williams and not Curtis Thomas. He said Thomas was off-island he was supposed to return the Saturday before postulation day.He said Thomas missed his flight and only arrived on the island on Monday, August 8th, 2016 after 3pm and as such he could not sign the declarations. Richardson because of that he had to redo their list and replace the number 15 candidate  and clearly they made an error on the list that was submitted on postulation day.Besides that there were two declarations submitted for Dennis Williams and the signatures did not match. Richardson admitted that the USP  submitted two declarations for Dennis Williams where the signatures did not match, regarding that issue, Richardson said they have more than one Williams on the list, he said the other Williams accidentally signed a form with Dennis Williams name. He said the second Williams signed two forms, one with his own name, and one with Dennis Williams name but that document was added to the file accidentally. He said that even though all of these things were rectified and explained to the members of the voting bureau within the three days period yet the voting bureau refused to accept the changes and explanations given by him and his team.

Richardson said that he has a meeting at the court on Friday to see how urgently the court could handle his case knowing the urgency of the situation, he said that it is clear that the voting bureau wants him to go through the legal system to get a verdict since they are not able to take a decision even though they saw the mistakes and the errors which was not intentional.

The Leader of the United St. Maarten (US) party MP Frans Richardson explained on Friday that the party will use the legal recourse available to it to contest the non-admission of a candidate on its list by the Main Voting Bureau for the September 26 Parliamentary election. A petition to the court was submitted since Thursday and the petition letter would be sent to the Main Voting Bureau on Friday afternoon.

Richardson explained that due to an administrative oversight and several unforeseen circumstances up to the deadline to submit the list of candidates, one change wasn't made on one piece of documentation. He said the initial candidate was stuck in transit off-island and could not get back in time to sign his declaration or issue it in writing from where he was. As such, the party moved hastily to make the necessary changes. It was during this process the administrative error occurred. According to the Main Voting Bureau, by law at this stage changes to an already submitted candidate list can only be argued in front of a judge.

The party is of the opinion that it has good grounds to contest the change in court considering that the replacement candidate has signed the personal declaration to contest the elections and the candidate's name appears on all but one document: the original list of candidates. Moreover, even if the party wants to keep the original candidate because the candidate has since returned to the island, this also would not be allowed because the candidate cannot sign and submit the declaration at this stage in the process. “So we can’t run the original candidate who was not here due to no fault of his own and we can’t replace him with someone who is here and has signed during the corrections phase,” Richardson said.

Richardson stressed that if a party is given the opportunity to make corrections to documentation as prescribed by law, this should also include the original list IF a candidate on this original list has not signed the supporting documents or verified that he or she is indeed running by signing the personal declaration. If this is clear, Richardson said he does not understand how the intent of the law can’t allow a change in this regard.