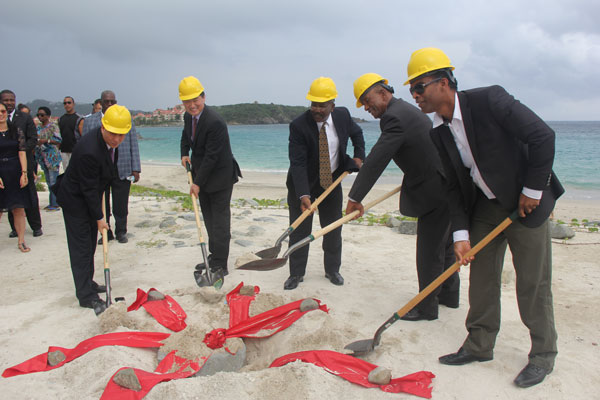 Political Parties mostly involved in the peaceful protest at the groundbreaking site.

BELAIR:--- The chairman of New Lifetown Shuqiang Cui aka Trey called on the less than 50 persons that showed up at the Belair Beach where the groundbreaking ceremony for the Pearl Caribbean China was taking place Saturday afternoon to put their hands together and join them as they seek to develop St. Maarten and its economy with the Pearl Caribbean China Resort that will be constructed in Belair.
At Belair beach the protestors with no more than 50 persons bearing placards included the leader of the St. Maarten Christian Party (SMCP) Wycliffe Smith and candidate Claude Peterson, leader of the HOPE Mercedez Wyatt and UPP candidate Tamara Leonard. Among them was UP supporter Sjaoel Richardson, Rene Cotto Wilson, Jadira Veen from PRIDE Foundation, and a few supporters who remained peaceful as the speakers addressed the gathering. At times they held up their posters but most of them left the scene when they heard what the project entails. One of the protestors held up a placard stating that she is not afraid of the Chinese but is afraid of the politicians on St. Maarten. Another placard reads, one million tourists, but give us a road, another reads for sale friendly island at reduced price.
Trey in his remarks prior to the groundbreaking assured everyone at the site that they will not destroy not one tree or grass before they decide on how they will protect it during the construction which is slated to begin during the first quarter of 2017. The developer said that they do not engage in empty talks but engages in practical projects that are beneficial to the people and focuses on inner quality because they are very conscious and responsible for their actions. They also acknowledge the closeness of the nature reserve and the pond that is close by, which needs to be revitalized and protected from the current polluted state it is in. Cui said that they know how to respect the environment and they treat environment and the eco-industry as their lives
The developer also explained that even though they will not commence construction before January 2017, they already committed to assisting St. Maarten in several ways almost immediately, one being that a fully equipped ambulance will be donated to the (the Windward Islands Emergency Medical Foundation) WIEMS, while solar panels will be donated to all schools, and the homes of the elderly, LED light bulbs are also part of the donation for the country’s schools. Besides that chairs, tables, solar panels, and inverter air conditioners will be donated to the Charlotte Brookson Academy for the performance arts.
Cui said that when the project starts it will create at least 400 stable and high paying jobs for locals while local contractors will be used to construct the resort as long as they meet the necessary standards. Another vision they have for the country is to create an incubation for at least 100 persons to become their own entrepreneurs all which are a “win-win” operation for everyone on St. Maarten since their intention is to work with the people and the business sector on St. Maarten both in the construction and operational phase when it is completed. The project will not be solely directed by China. Focus will be placed on renewable energy and information technology in order to make a more affordable and convenient living in St. Maarten. The also vowed to support St. Maarten’s healthcare, culture and educational systems which will increase the overall quality of life on St. Maarten.
One of their aims is to enhance the livelihood of the people of St. Maarten as they came to the country with the ideology of sustainable development while they fully understand the need for economic development both for the people and the government of St. Maarten. Cui said they are very conscious of the negative impact their project will become if they are not eco and environmentally friendly and should they ignore the lives of the people of St. Maarten. The developer said that they have been adhering to sustainable development concept for many years, while they are determined to promote the economic development of the country while protecting the ecological environment. They promised to protect the environment, and to bring a happier lifestyle for the people of St. Maarten with the Pearl Caribbean China by bringing practical solutions to the country since this project will bring more trade to St. Maarten with quality products. The Pearl Caribbean China will be the exchange center between China and the Caribbean. 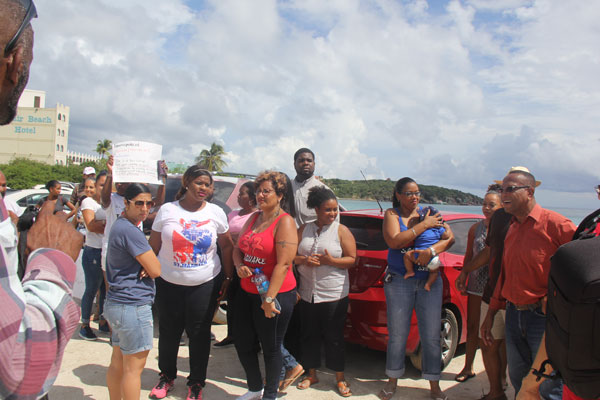 In addressing the protestors they said they have not been affected by the negativity because they know that the project will bring about sustainability for the country and its people. Cui insisted that the Pearl China-Caribbean is not a real estate project, therefore, the Pearl Caribbean China will become the most popular project in the region. He called on the few protestors that have placards at the site to let go of their misunderstandings and join them in the construction of the project since the project will be beneficial for everyone, he called on the protesters to regroup their energy and build the future of St. Maarten. One of the things the people on St. Maarten have to do is to prepare themselves by getting the right training to take up the jobs that will become available, and those who wants to become business owners should also prepare. The Chinese developers will assist in the training locals to take up the jobs that will be available for locals.
Finance Richard Gibson Sr. said when he stated that St. Maarten hit the jackpot when they found the Chinese investors he truly meant it because of St. Maarten will not have to struggle to balance its budgets, neither will they have huge deficits, but instead the country will soon have a surplus. This project will increase trade on St. Maarten, he said the country has been selected when it is was facing turbulent times. He said that when he took office he personally sought a project that will boost the economy, the tourism industry, encourage trade and not to compete with resorts or hotels. He said if this project is not a gift to the country then he do not know what is a gift. Gibson said he understands the shock because of the government of St. Maarten did not have to engage in months of discussions or drag its feet for too long before they could reach this stage. He said that while some people are protesting the parcel of land that the Pearl Caribbean China will be constructed on was air-marked for another huge project which was given to Barbaron, who already obtained a building permit and all the studies necessary were conducted since 2016. He said that the same architect was hired and he believed that someone forgot to mention all of that which he believe caused the misunderstandings. Gibson made clear that the project is not a National Alliance project but instead it is a St. Maarten project since everyone will benefit and his view is now going to turn the corner. He said that having an incubator for trade and another business is what St. Maarten needed. He complimented the investors for the commitments that they have made one being providing training, and the creation of jobs for the people of St. Maarten.
Prime Minister William Marlin thanked the investors for their commitments they have made by donating a much-needed ambulance to the WIEMS whose ambulance is more than 16 years old. Marlin also thanked the investors for the solar panels, LED bulbs, and other materials they committed to donating prior to the starting of the construction.
He said that Pearl Caribbean China is not a hotel or resort, it’s a project that will diversify St. Maarten’s economy. He said for years the people have been crying out for diversification while the economy slowed down over the years, but with this project, the island will get what it truly needs. Marlin said he do believe that the people have a right to be concerned, and ask questions, however, they also must acknowledge that the pond in Belair is polluted from sewage that is draining from SMMC to the pond. He said soon that will become an environmental disaster
After the groundbreaking ceremony, MP Frans Richardson attended, along with Minister of VROMI Angel Meyers who participated in the symbolic groundbreaking.
After the groundbreaking ceremony, members of the media was given an opportunity to ask questions at a press conference.
During that press conference, more about the project surfaced, one being a robot parking that will have 600 parking spaces that will be operated technologically, a botanical garden will be on the premises that will have Caribbean plants, this garden will be open for schools to visit, at some point they will include a butterfly farm. The project itself is a trade center for the entire region. Businesses from the various islands would get the opportunity to meet with manufacturers of Chinese products and they will also be able to order directly from China instead of the USA.
Training will be provided for locals in order for them to fill the positions that will become available when the project is completed.
While the developers are Chinese and on Saturday they were obliged to use translators, the developers assured that those that will be working on the project will be bilingual and that communication will not be a problem.
Plans are in place to clean up the entire Belair Beach and to build a slope with sand in order to prevent erosion and dark water at the beachline. Even a pool within the ocean is a part of the project.

Click here to view photos of the groundbreaking event of Pearl Caribbean China.