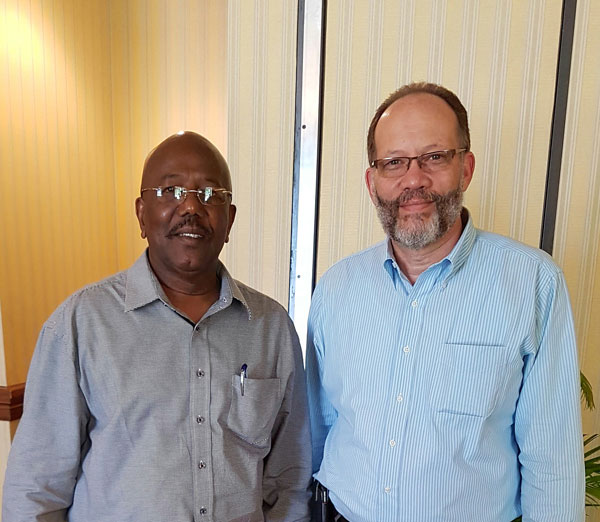 BARBADOS/PHILIPSBURG:--- In the margins of the EU- Caribbean Sustainable Energy Conference in Bridgetown Barbados, Prime Minister of Sint Maarten, The Honorable William Marlin met with the Secretary-General of the Caribbean Community, Ambassador Mr. Irwin LaRocque. The primary purpose of the meeting was to discuss the state of affairs of Sint Maarten’s application for associate membership to CARICOM and secondly to test the potential for regional cooperation between the Caribbean Overseas Countries and Territories (OCTs) and CARICOM/CARIFORUM.

During the meeting, Ambassador LaRocque updated Prime Minister Marlin on Sint Maarten’s application. LaRocque informed Prime Minister Marlin that Sint Maarten’s application, along with that of Curacao and Aruba have the attention of the technical working group specifically established to devise the terms and conditions of associate membership to CARICOM, as they had not been enshrined in the Revised Treaty of Chaguaramas , the Community’s foundation document . Ambassador LaRocque also explained that CARICOM is presently working on an enlargement policy for new members which they intend to present to the Heads of Government for decision making by the end of this year.

Sint Maarten officially sent its letter of interest for associate membership to CARICOM in January 2014. During the intercessional meeting of the Heads of Government in March 2014, the Heads took note of all the applications for associate membership before the Community and endorsed the process of application. Consequently, a technical delegation from the Government of Sint Maarten went to visit the CARICOM headquarters September 2015 in Georgetown, Guyana.

As Regional Authorizing Officer (RAO) for the Caribbean Overseas Countries and Territories’ (OCTs) 11th EDF Regional Program, Prime Minister Marlin also discussed the potential for possible partnerships with CARICOM. Prime Minister Marlin informed Ambassador LaRocque, that with CARICOM being a regional organization and successfully completing the so-called ‘pillar assessment’, CARICOM has been included in the list of the preselected nine organizations requested to submit an expression of interest to function as a delegated partner to (financially) manage the 11th EDF Caribbean Regional Programme along with the RAO. Ambassador LaRocque responded positively to this, explaining a shared view on wider regional cooperation and ensured that CARICOM would respond to this request. A meeting with CARICOM and St. Maarten on this matter, will follow in the coming period.