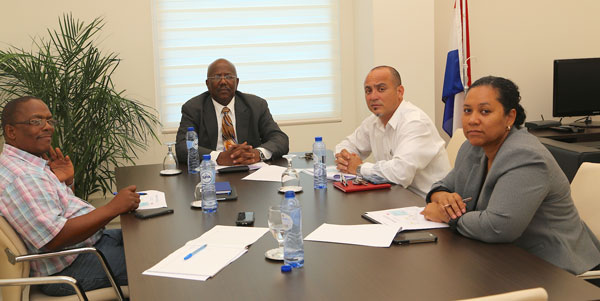 Pond Island:--- TelEm Group technicians and engineers successfully restored internet service to Dutch St. Maarten at approximately 5:30 pm Thursday evening after effecting repairs to a fibre connection between the French side and the Dutch side of the island.

Technicians and engineers working round the clock, successfully cleaned up a faulty link that was causing the company’s internet service to operate sporadically and sometimes not at all, since the outage Sunday.

“The local fiber connection came up several times, but deteriorated as soon as any load was put on it,” said Chief Technical Officer, Mr. Eldert Louisa.

“I am happy to say that at approximately 5:30 pm the team working on the restoration of the internet service reported that the service is restored and they are receiving zero errors, indicating that the connection is stable and customers can once again utilize their internet service with less interruption,” said the CTO.

Mr. Louisa said the team will continue to monitor the situation, but for now he is very hopeful that the connection will remain stable.

He has thanked the team working on the connection problem since Monday, recognizing that they have not left their posts since the problem arose and have literally worked around the clock to restore the service to the general public and to TelEm Group customers.

News of the internet service restoration came within an hour of a meeting with Prime Minister, Mr. William Marlin Thursday, during which TelEm Group Supervisory Board of Directors, Vice-Chairman, Mr. Paul Marshall and Chief Commercial Officer (CCO) Mr. Brian Mingo, briefed the Prime Minister on Sunday’s outage and the steps the company was taking to repair the damaged SMPR-1 cable and also maintain services to customers utilizing alternative cable routing systems.

Mr. Mingo outlined the steps TelEm Group has taken to provide continuity of service to the public with the little bandwidth available, however, this was not enough to provide for the company’s primary internet feed of 6Gb.

“We set up a hot line to do an intake of problems being experienced by businesses with the intention of following up and providing solutions for them. Our Helpdesk has also been briefed for the flood of calls they have been receiving since Sunday,” continued Mr. Mingo.

Regarding the damaged SMPR-1 cable, Mr. Mingo informed that the affected part of the cable lies 2.5 kilometers from Puerto Rico with all indication that nearby reefs and rough seas caused the damage.

“The seas are still too rough and dangerous for a contracted diver to inspect the cable and obtain video and photos so that we can see for ourselves just how bad the damage is and how we have to mobilize smaller ships and equipment that can navigate shallower waters and reefs to do the repairs,” continued Mr. Mingo.

He said taking the Christmas holidays into consideration, and also depending on where the repair vessels are currently located, it could take up to eight weeks for the repairs to the SMPR-1 cable to be completed.

Mr. Marlin was thankful for the update and hoped the effect on business and the general public would cause as little impact as possible.

The Prime Minister enquired about provisions being made by the company for banks, main business operations, and PJIAE, in particular, especially after hearing of the chaos that ensued on Sunday shortly after the damaged SMPR-1 cable took effect.

Vice-Chairman of the Supervisory Board of Directors, Mr. Paul Marshall, was also pleased to hear about the restoration of service following the meeting with the Prime Minister and Shareholder, Thursday.

“It was important for us to update the Shareholder on the situation, especially since a number of things that were being attempted were not working out as planned,” said Mr. Marshall.

“I want to thank the Prime Minister for taking time out of his busy agenda to see us at a moment’s notice so that we could give him this briefing and I most definitely want to thank all those within the TelEm Group who have worked diligently during the past several days to ensure our customers have their internet service working optimally once again,” said Mr. Marshall.

CTO Mr. Louisa said with the connection to the new undersea cable some IP addresses may not be recognized when some customers are surfing online.

“With the fibre connection stabilized we will be able to fine tune and change configurations to fully restore the service to what it was before the outage Sunday,” added Mr. Louisa.

The TelEm Group Supervisory Board of Directors and Management have meantime apologizes to residential and business customers for the interruption in internet service since Sunday and inconvenience caused by the cable damage that was not within the company’s control.