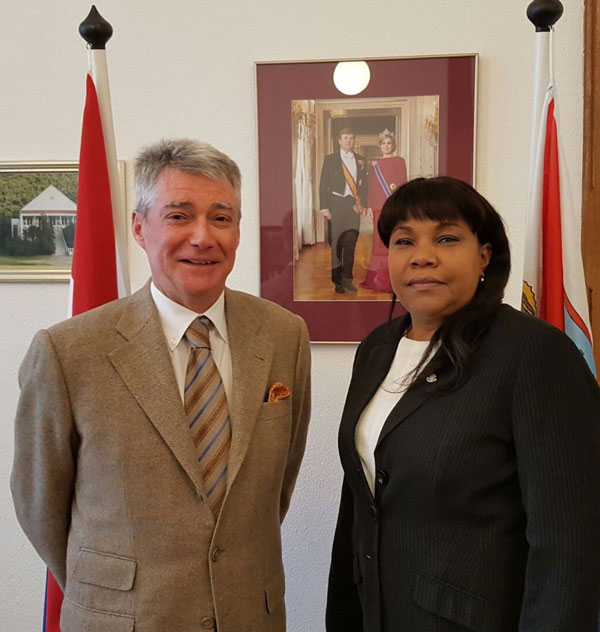 The Hague:--- Minister Plenipotentiary, H.E. Mrs. H. Doran York, was honored with an official visit from His Excellency, Mr. Urs Breiter, resident Ambassador of Switzerland to the Netherlands, since September 2014.
During his introduction to the Minister Plenipotentiary, the Ambassador informed her of the pending assignment of the new Honorary Consul for Switzerland to Sint Maarten, Curacao and Aruba, Mr. T. Markert.
Mr. Markert will be the successor of the current Consul, Mr. Mike Koch who will be relinquishing his post. The to be appointed Honorary Consul, Mr Markert is a Swiss national currently residing on Curacao and currently functions as Deputy CEO of the international airport of Curacao.
During his last visit to the Caribbean, the Ambassador also paid an official visit to Sint Maarten, where he had the distinct pleasure and honor to meet with Prime Minister, the Honorable William Marlin. This was a visit which he indicated as being very cordial and most informative.
It is further expected, that once the appointment process of the new Honorary Consul, Mr Markert is completed, an introductory tour of the islands will be convened. This will take place around the month of May 2017.
During the visit with the Minister Plenipotentiary, he showed genuine interest in the culture, the historical perspective of the people, the economy and the government apparatus in the area of crime fighting. He further expressed his interest in the socio-economic development of Sint Maarten and Saint Martin where it pertained to joint collaborations.
The Minister Plenipotentiary gave an in depth account on the situation at hand on the island where it pertains to the functioning of government in particular and in general the overall development of Sint Maarten based on the plans and intentions to further development Sint Maarten.
After the very informative and fruitful meeting, friendly and cordial remarks were made regarding the cuisine, the beauty and potential of Sint Maarten. Both dignitaries expressed the goal to remain in contact while stationed in The Hague.