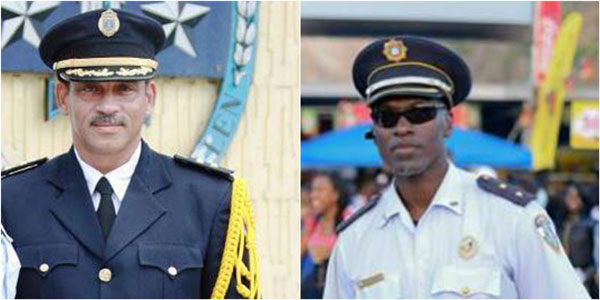 PHILIPSBURG:--- Prison Officer Wilfred Williams who began working at the Pointe Blanche House of Detention has been reassigned to the Prison by Minister of Justice Rafael Boasman. Williams began working at the Pointe Blanche Prison since 1994 but had to leave when the former Prison Director Edward Rohan chose not to work with him to properly manage the House of Detention. Williams worked under the management of the former director Russel Ricardo and for years was the adjunct director of the Pointe Blanche House of Detention.
Williams then requested a transfer and has been working at the Police Academy as an instructor. On Wednesday, Minister of Justice Rafael Boasman released the names of the two persons whom he said would manage the prison since the director of the prison Edward Rohan was sent on mandatory leave.
Also appointed to work on restructuring the prison is Inspector of Police and known CPO Steven Carty. Carty also serves as spokesman for KPSM.
Last week the Minister of Justice stated that he chose two persons within the justice chain to restructure the prison and bringing it under control. At the time the Minister did not release the names of the two civil servants whose main tasks are to work on the human resource problems at the Pointe Blanche house of detention since a number of prison guards are out on sick leave, while the other person will work on the technical aspect of the prison, one being the repairs that need to be done immediately and to work towards constructing a new prison.

Asked by SMN News what other measures law enforcement officers intend to take to recapture escaped prisoner Katron Kutchi Fortune since the prisoner escaped one year and eight days and ago and to date, the cannot be recaptured. Minister of Justice Rafael Boasman said he could not release the plans police have in place because then he would be telling the escapee what they intend to do. He did assure that members of KPSM and their counterpart on the French side never stopped looking for the escaped prisoner. During the earlier part of last year when Kuchi escaped from Pointe Blanche Prison the Gendarmes conducted several controls, house searches and even used their helicopter to look for the wanted man each time they were tipped off. Police on the Dutch side also made a few house searches and arrested an elderly couple but the real door to door manhunt by KPSM was not so visible.

Minister Boasman also announced on Wednesday that KPSM intends to "train" or give tips to business owners in order for them to assist with curbing the violent crimes committed against business owners.