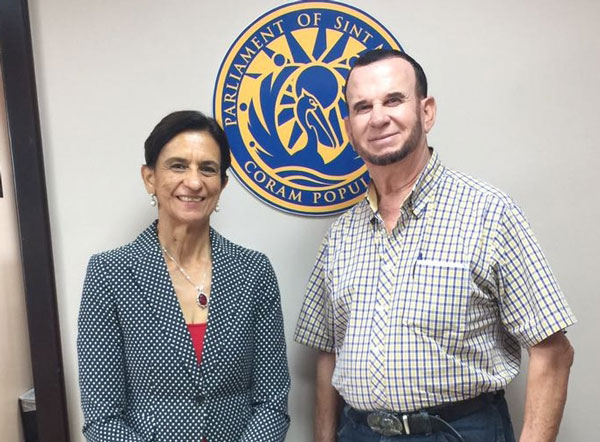 PHILIPSBURG:--- During his recent visit to St. Maarten, Mr. Rudy Croes paid a courtesy visit to DP leader, Sarah Wescot-Williams, also in his capacity as vice-chairperson of the Permanent Conference of Political Parties of Latin America and the Caribbean (COPPAL).

The Democratic Party is a long-standing member of COPPAL, however during the last couple of years, has been inactive as far as this regional political body is concerned.
COPPAL is an international organization of political parties in Latin America and the Caribbean. It was created on 12 October 1979 in Oaxaca, Mexico, and brings together Liberal, social democratic, Christian democratic, and leftist political parties. Today COPPAL is the most important forum of political parties in Latin America and the Caribbean.
COPPAL’s goals are: defending democracy and the legal and political institutions while fostering their development and improvement; strengthening the principle of self-determination of the peoples of Latin America; promoting regional integration; supporting any initiative for disarmament; promoting the defense, sovereignty and better utilization of the natural resources of each country in the region; boosting development; promoting Latin American regional organizations and joint actions that will enable the establishment of a more just international economic order; defending and promoting respect for human rights."
COPPAL is desirous of reactivating the membership of the Democratic Party, a request that the DP leader promised to put to the board of the Party.