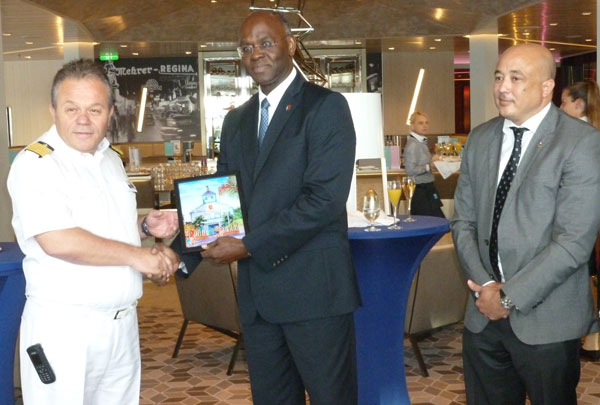 POINTE BLANCHE:---  Mein Schiff 5 made its inaugural call to the destination on Thursday, April 13. The sister ship Mein Schiff 4 was the first vessel to open the 2016-2017 cruise season with its inaugural visit back in November.

The vessel is the newest member of the fleet of TUI Cruises and is identical to her sister-ship the Mein Schiff 4.

During the inaugural visit, His Excellency Governor Eugene Holiday was present for the official plaque exchange and words of welcome that took place between Captain Ioannis Anastasiou and Port St. Maarten Chief Executive Officer Mark Mingo.
The Governor as well as a delegation comprising of Management and Supervisory Board members of Port St. Maarten, representatives from the Cabinet of the Minister of Tourism, Economic Affairs, Transport and Telecommunications, St. Maarten Tourist Bureau and Accessible Ventures, after the plaque exchange, were given a tour of the vessel.

At the end of the tour of Mein Schiff 5, His Excellency Governor Eugene Holiday was given a tour of the Dr. A. C. Wathey Cruise & Cargo Facility by CEO Mark Mingo which concluded with a luncheon at the Cruise Terminal Building.

Some of the areas that Mingo informed His Excellency Governor Holiday about during the tour of the port were the Enterprise Risk Assessment and Portbase Port Community System plans and work methods; the strategic agreements and relationship that the port has with cruise lines; current homeporting investments and future plans and how preclearance would further enhance expansion of the aforementioned; growth in cargo shipping and trans-shipment as well as cruise ship provisioning – currently at 35 per cent.

TUI Cruises, a German cruise line, is a joint venture of the German tourist firm, TUI Group and Royal Caribbean Cruises. TUI Group is a multinational travel and tourism company headquartered in Hanover, Germany. It is the largest leisure, travel and tourism company in the world, and owns travel agencies, hotels, airlines, cruise ships and retail stores. The group owns six European airlines, the largest holiday fleet in Europe, and nine tour operators based in Europe.

The TUI Group has some 76,000 employees; 1,800 travel agencies; six airlines with 130 aircraft; and 300 hotels and resorts. The group airlines operate both scheduled and charter flights to more than 150 destinations worldwide departing from more than 60 airports in nine European countries.
Catering to the German market is one of Port St. Maarten’s marketing strategies which has been promoted over the years while attending cruise conferences and having discussions with cruise line executives.

Mein Schiff 5 after being in the Caribbean since October 2016 was making its way back to the Mediterranean where it would be deployed for Mediterranean Sea cruises. The cruise ship picked up passengers in Barbados and La Romana, Dominican Republic prior to a stopover in St. Kitts and its inaugural call last Thursday to Sint Maarten.

The vessel was built by Meyer Turku Shipyard in Terku, Finland. Construction of the vessel started in November 2014. The keep-laying ceremony was held in June 2015 and the outfitting commenced in January 2016. The vessel made its maiden voyage in July 2016. Mein Schiff 6 is to be delivered in 2017. Orders have also been placed for Mein Schiff 7 and 8 with deliveries in 2017 and 2018.