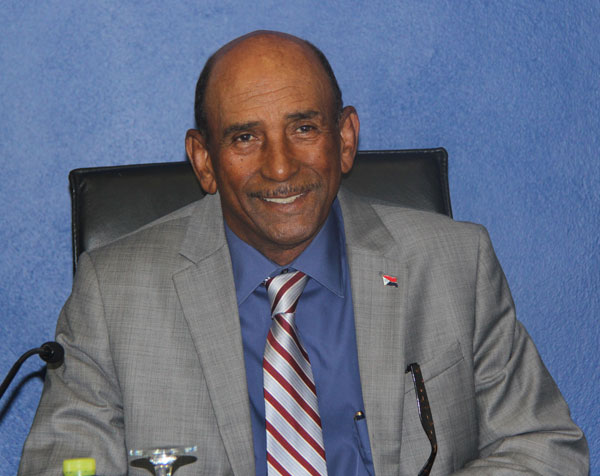 IT Problems may delay finalization of budget 2018 --- Minister Gibson Sr. --- SZV and APS not yet paid.

PHILIPSBURG:--- Minister of Finance Richard Gibson Sr. announced on Wednesday that while in Curacao last week he received a receipt from the government of Curacao showing that they have deposited NAF.59M which has been derived from the division of assets from the former Netherlands Antilles. Asked now that government has received that monies which he said in prior press conferences will be used to pay off the debt owed to SZV and APS have been paid to the two entities and if the government of St. Maarten began paying back SZV for the investments they made in the New Government Building. The Minister said that while the monies are on government accounts the payment to SZV and APS have not yet been made. As for the rent for the government building Minister Gibson said the rent is due in the month of July.
Cleaning of Tax System ---COM approved the legislation to clear up the clutter, succession to be repealed.
The Minister of Finance also announced that the Council of Ministers approved the legislation to clear up the clutter in the tax system. Gibson said that the focus is to shift from direct taxes to indirect taxes while stabilizing government revenues that would allow government to meet its obligations to the general public. He said currently the revenues is at a level that is insufficient to meet its obligations while maintaining a balanced budget.
Gibson said reforming the tax system is complicated and it is also quite a challenge, thus the process has been tackled in segments. He said laws that are hardly used and those that no longer serves the best interest of the people will be removed.

Laws that will be removed (repealed) are the following:

• The succession law, which the Parliament of St. Maarten indicated they want to be repealed.
• The Property Tax law which has never been implemented on St. Maarten while it is implemented in Aruba and Curacao will also be removed since it is also considered a clutter. This also includes the surcharge that goes with property taxes.
• Dividend tax which has not been producing anything.
• The law on Economic Zones which have been on the books for many years.
• Tax Industry Tax Facility, which is used by hotel owners will no longer be offered to hoteliers.
• Tax Facility for the development of land.

Minister Gibson said all of the laws that will be stricken based on a decision taken by the Council of Ministers were done based on the recommendations they received from the experts since 2015. Gibson made clear that while the COM took the decision to repeal the various laws, they still have to follow the various channels before it can be expedited. He said the Council of Advice will have to look at the decision prior to it going to the Parliament of St. Maarten for debate and finalization.
IT System vexing issues --- will cause a delay in finalizing 2018 budget.
Gibson said that it has been some time now the government of St. Maarten have been having some time now and it is indeed a vexing issue, he assured that government will solve its IT problems.
The Minister of Finance said he already got some type of indication that the CFT will approve a substantial loan (NAF 40M) to St. Maarten since they have already produced two balanced budgets.
He said that goal is to bring the tax department, Inspection and the Receivers Office in one building and improving the IT system to ensure they have an efficient system since this is what have been hampering compliance over the years.
Gibson said due to the IT problems facing government has caused a major setback because the information that had to be registered and recorded for them to make their financial statements were not recorded due to the IT issues. He said the finance department have a backlog of 4 months. The Minister said this is a vexing issue because they do have a deadline to meet, such as the budget, annual statements all of which could be in jeopardy.