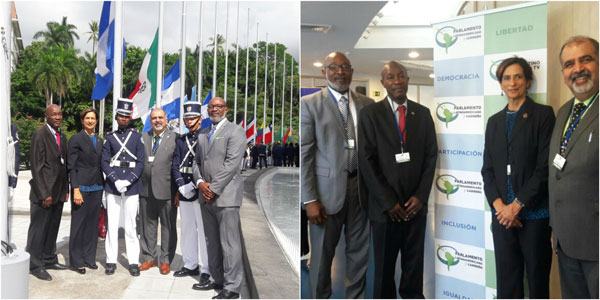 PANAMA/PHILIPSBURG:--- On June 9th and 10th, a delegation comprising of Members of Parliament of Sint Maarten headed by President of Parliament Mrs. Sarah A. Wescot-Williams attended the 33rd General Assembly of the Latin American Parliament (Parlatino) in Panama City, Republic of Panama.
The Assembly started with the raising of the Parlatino flag and singing of the Parlatino anthem. This ceremonial part was followed by several panel discussions on the topic of migration in Latin America and the Caribbean from different angles, titled:
Panel 1 - The Human rights of migrants: "The inclusion and social cohesion, elimination of all forms of discrimination (racism, xenophobia, and intolerance)".
Panel 2 - The Effects of irregular and regular migration: "Decent work, labor mobility, recognition of skills and qualifications".
Panel 3 - International cooperation and the governance of migration in all its dimensions: "Borders, transit, entry, return, re-admission, integration, and reintegration".
Panel 4 - Illicit trafficking in migrants, trafficking in women, children and youth: "The contemporary forms of slavery, identification, protection and appropriate assistance to migrants and victims of trafficking".
Panel 5 - The contributions of migrants and diaspora to sustainable development: "Remittances and the transferability of benefits won".
Panel 6 - Migrations caused by the effects of climate change or crisis: "Successful strategies for protection and assistance, public policies for sustainable development and conflict resolution”,
The keynote speaker at the General Assembly of Parlatino was Mr. Kailash Satyarthi, Nobel Prize winner for his contribution to the development of international conventions on the rights of children. He has waged a peaceful struggle to stop children from being exploited for labor instead of attending school. The main message of his address was to make parliamentarians aware of the fact that they do not only make laws and govern countries but that they are the custodians of inspirations and dreams. Members of Parliament have to fulfill the dreams of all children and of all men with the laws that they make.
On the 2nd day of the General Assembly, several resolutions and declarations were approved including a resolution on the current situation in Venezuela. In this resolution, Parlatino calls on the parties to the conflict in Venezuela to engage in dialogue in order to stop violence with the intention to restore the internal development, sustainability, and democracy of the battered country.
Members of Parliament who also attended the General Assembly are MP Claret M.M. Connor, MP Sidharth M. Bijlani, and MP George C. Pantophlet. These Members also attended Committee meetings of which they are a member on June 8, 2017.