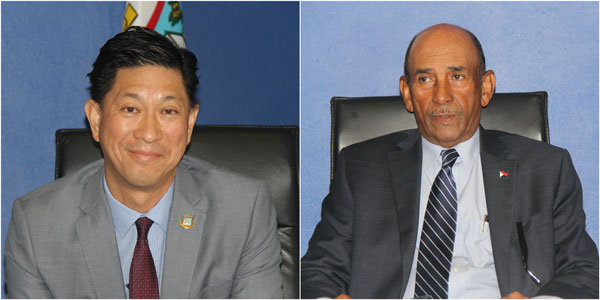 Premiums will increase which the private sector has problems with --- Finance Minister --- SHTA objecting to high cost.

PHILIPSBURG:--- Minister of Health Emil Lee reacted to the statements made by the SHTA on the implementation of the National Health Insurance ( NHI) which they also requested be postponed. Minister Lee made clear that he do believe the discussion on the NHI is a good discussion because everyone deserves to have quality healthcare. He said St. Maarten have been discussing the NHI since 2009 when he was the president of the SHTA. Lee went on to explain that St. Maarten was given an instruction by the Kingdom Council whereby they must implement the NHI by the end of 2017. This means by the end of the year the Minister must present the draft law on the restructuring of the healthcare system to Parliament He said already the window is tight meaning that he does not have much time based on the instruction and while he does not want anyone to think that the discussions on the NHI are combative there are a few things he does not agree with. Asked if the SHTA was given sufficient information as they indicated to the CFT that they did not have sufficient information on the NHI Minister Lee said he does not agree with the CFT and the SHTA because information on the NHI have been ongoing for years now.
In addition to that Minister of Finance Richard Gibson Sr said that he also met with the SHTA and their concerns is the high cost that will come with the implementation of the NHI. The Minister of Finance said that he strongly believes that St. Maarten would have to implement some sort of indirect taxes whereby visitors to the island will contribute to the NHI. He made clear that this does not mean that the premiums will not go up but it will not go up as high. In supporting the proposals made by the Minister of Finance Minister Lee he also suggested that a taxation be placed on tobacco and alcohol and even sugar beverages.
Minister Lee further explained that each time patients are not able to pay their bills for healthcare government have to pick up the tab. He explained that even people in the private sector would take private insurance while they are working and when they go on pension they return to the government healthcare system which allows them to pay a premium based on their income.
Asked by SMN News if he thinks the private sector will pay their healthcare premium when it is increased knowing that SZV claimed to have almost $200M on the streets which ATS and SZV is trying to get businesses to pay off. The Minister said that government have been working on compliance and it is something they discuss almost on a daily basis.
It should be noted that SHTA is not the only ones that have been protesting the implementation of the NHI, but healthcare institutions such as the White and Yellow Cross, Mental Health and healthcare professionals.