New initiative will support innovative and effective equal pay policies and practices around the globe. 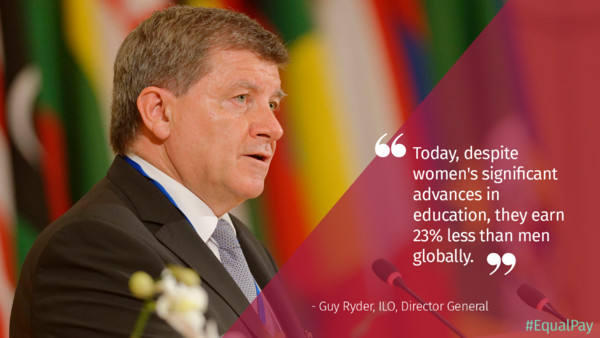 NEW YORK:--- One of the most persistent barriers to women’s success at work and to economic growth, unequal pay, will be actively challenged by a new global partnership, the Equal Pay International Coalition (EPIC).

With the launch of EPIC, the International Labour Organization (ILO), UN Women and the Organization of Economic Cooperation and Development (OECD) bring together a diverse set of actors at the global, regional and national levels to support governments, employers and workers and their organizations, and other stakeholders, to make equal pay between women and men for work of equal value a reality.

EPIC is a global response to a critical problem that has been prioritized in the UN’s Sustainable Development Goals (SDG) , in particular Target 8.5 which calls for equal pay for work of equal value by 2030. Equal pay, in addition to empowering women, can have a significant impact on achieving other key goals such as promoting inclusive societies, reducing poverty, and creating conditions for decent work and gender equality.

Phumzile Mlambo-Ngcuka, Executive Director of UN Women, said “there is no justification for unequal pay for a woman when her job is of equal value to a man’s. This injustice has been unseen for too long, and together we are changing that. Equal pay for women translates into lifelong benefits for them as well as their families: better career prospects and lifetime earnings, greater independence, and higher investments in their children’s education and health.”

Employers and trade unions, as well as other key stakeholders, will have a central role in the application and rolling out of equal pay policies. A Platform of Champions, launched earlier this year by UN Women at the Commission on the Status of Women, will also contribute to strengthening advocacy on equal pay, as part of EPIC.

A recent ILO-Gallup report , based on a representative survey of 142 countries, shows that women and men alike want women to be in paid jobs, but there remain a range of challenges for women at work, including unequal pay, balancing work and family responsibilities, lack of access to affordable care, and unfair treatment.

OECD Secretary-General Angel Gurría noted that “gender inequality has many roots, including flawed policies, discriminatory laws and regulations, misplaced economic incentives, workplace practices, and social norms and institutions.” He asserted that “it is in our power to make an immediate improvement in the quality of life of hundreds of millions of women and their families if we succeed in delivering equal pay for men and women.”

The issue of equal pay remains high on the UN’s agenda. This year, the UN Secretary-General’s High-level Panel for Women’s Economic Empowerment, released a report that focused on transformative actions needed to advance women’s economic empowerment, highlighting the importance of equal pay for work of equal value.

The innovative work of the newly created EPIC will contribute significantly to challenging some of the main assumptions reinforcing unequal pay, which were also highlighted by the High-Level Panel and the ILO-Gallup report. The International Labour Organization (ILO) is hosting a capacity-building workshop in Guyana from September 13-15, 2017. The purpose of the workshop is to boost the capacity of government officials to effectively plan, prepare and write key national reports on International Labour Standards.