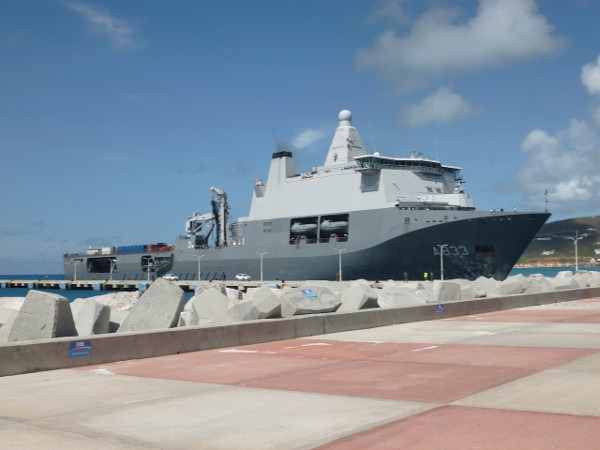 PORT ST. MAARTEN:--- A number of officials namely Prime Minister William Marlin, the Vice President of Parliament Rodolphe Samuel, Minister of Tourism & Economic Affairs Mellissa Doncher-Arrindell, Minister of Public Housing, Spatial Planning, Environment, and Infrastructure Management (Ministry VROMI) Christopher Emmanuel, Member of Parliament Theodore Heyliger, along with Port St. Maarten Management and Staff were on hand throughout the day at Cruise Pier Northwest on Sunday to observe the Royal Netherlands Navy’s biggest ship, the HNLMS Karel Doorman A-833, a Joint Support Ship (JSS), that has brought in disaster relief supplies along with a number of vehicles for the emergency phase of post-Hurricane Irma/Maria.
The HNLMS Karel Doorman consignment is the single largest shipment of relief goods Post-Hurricane Irma whereby offloading at Port St. Maarten started on Sunday afternoon comprising of goods with a total weight of over one million kilos and valued at an estimated one million Euros.
The Karel Doorman with a length of 204.7 meters, is a multi-functional logistical support vessel for amphibious operations that can be deployed to supply units at sea, for strategic sea transport, and for logistical support from the sea, with the ship acting as a seaborne base for implementing and supporting land operations.
The HNLMS Karel Doorman has 2,000 lane meters for transport of material such as tracked and wheeled vehicles or containers; has an elevator and crane for up to 40 tons; a roll on/roll off facility for vehicles, and a steel beach stern construction for accommodating cargo transfer via landing craft.
The vessel features a below-deck transport holding area, medical facilities (20 treatment areas, two surgery rooms), loading/unloading equipment, a helicopter deck with two landing pads for different types of helicopters; displacement of 27,800 long tons; beam of 30.4 meters; draught of 7.8 meters; speed of 18 knots; range of 9,800 nautical miles; 150 crew and 150 non-enlisted persons.
The Karel Doorman was built at Damen’s Shipyard in Romania, but was fitted out in Vlissingen, the Netherlands. The vessel costs US$480 million to build and was built between 2011-2014, and commissioned in April 2015.
The Royal Netherlands Navy is deployed both at home and abroad for crisis management operations, humanitarian assistance and disaster relief. The Royal Netherlands Navy is the oldest of the four Services of the Netherlands Armed Forces.
The Captain David Cargo Quay is open for relief aid and supplies but also building supplies and commercial cargo which are essential to the rebuilding effort.
The cargo quay is 540 meters long with a water depth of 10.5 meters, and houses up to 3,000 teu-containers at the quay’s storage area.
For the importation of goods, Port St. Maarten’s Management advises private consignees to follow-up with their usual cargo agents to regulate the aforementioned.
U.S. cargo to be sent to the island as normal are to be shipped via Tropical Shipping, King Ocean and Seaboard Marine Line.
European cargo bound for country Sint Maarten normally is shipped via CMA-CGM and Seatrade StreamLines, and arrangements should be made via those companies with their respective local agencies.