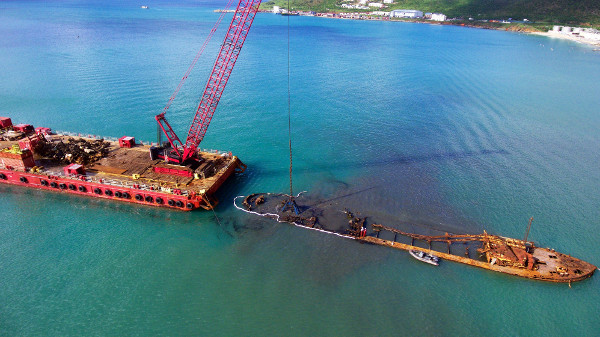 MARIGOT:--- President Daniel Gibbs announced since taking office in April 2017 that the wreck of the boat El Maud in Galisbay would soon disappear. Scheduled well before Hurricane IRMA, this public contract was awarded last July to the Dutch company Koole BV for € 395,000. Work began in mid-October and is now complete.
The ship El Maud ran aground 100 meters from the shore, about 4.5 meters deep, during the passage of Hurricane Lenny, in November 1999. Approximately 70 meters long and weighing 800 tons, the wreck was never disarmed and degraded over the years. The deprivation of the right of ownership having been pronounced by the administrative authority (article L5142-2 of the Transport Code), it allowed the community of Saint-Martin to act and proceed to the removal of this wreck.
The specifications provided for the sorting and evacuation of all types of debris and demolition waste and the restoration of the seabed. The Company had to produce a detailed methodological and organizational memorandum indicating precisely the material and human resources used to carry out this work.
The selective sorting of materials and the evacuation of all debris from demolition is a legal obligation, in accordance with the Environment Code (Art L541-24). The contractor was thus commissioned to implement the necessary means to guarantee the continuity of the evacuation channels and the recycling of the materials, and carried out a complete cleaning of the seabed at the end of the building site.
In addition to the wreck of El Maud, which has deformed the bay of La Potence for 18 years, many ships were damaged by the hurricane IRMA, on September 6, and must be removed from coastal areas. The yachting industry estimates that the number of boats affected was 1000, 500 of which were listed as wrecks.
The abduction of El Maud is a strong sign of the commitment of President Gibbs and his team for the rehabilitation and beautification of coastal areas.