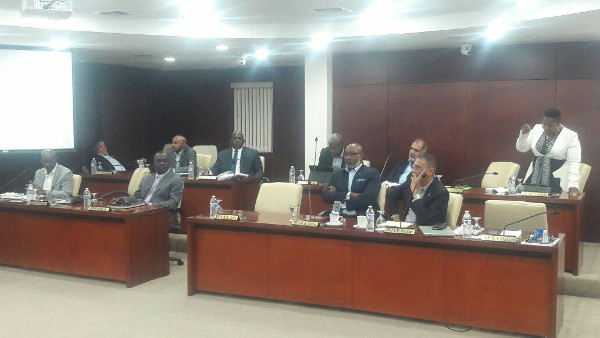 PHILIPSBURG:--- The new majority of the Parliament of St. Maarten voted in favor on a motion of non-confidence against six Ministers, namely Prime Minister William Marlin, Ministers Silveria Jacobs, Rafael Boasman, Christopher Emmanuel, Mellissa Arrindell-Doncher and Richard Gibson Sr., while no motion was brought against DP appointed Minister Emil Lee who it was said made his position available.
The now opposition voted against the motion of non-confidence brought against the six Ministers. Also, no motion was brought against the Minister of Plenipotentiary Henrietta Doran York.
The new majority also voted on two other motions which were also accepted by the new majority while the opposition vacated their seats during the voting.
Member of Parliament Silvio Matser informed the Parliament of St. Maarten that there will be days when they would all cry because the establishment of a new government or elections will take time and people will be approaching them.
MP Rudolph Samuel in his remarks to parliament said it’s a shame that the new majority would vote on a motion of non-confidence against Minister of Finance Richard Gibson Sr., Samuel explained that Gibson Sr. is the only Minister of Finance who managed to have the CFT approve the last three balanced budgets for the country. Both MP Samuel and MP Frans Richardson said Minister Emil Lee failed the people of St. Maarten miserably during the recovery process, they said that Minister Lee did not even provide the government (Prime Minister) with the forms that residents submitted at the Department of Social Affairs seeking assistance. Both members of Parliament who were part of the NA/USP/DP coalition said that the Minister of Finance made money available to assist the people of St. Maarten but Minister Lee never used or requested the money to assist the people of St. Maarten. The MPs went on to say that while the Council of Ministers agreed the Prime Minister would have been the only spokesperson for government during the crisis period, he was not responsible for everything, such as the closing of the border and the distribution of food supplies and tarpaulin.
In the meantime, the Prime Minister of St. Maarten has submitted the Landsbesluit to the Governor of St. Maarten to dissolve the Parliament of St. Maarten and call for early elections. Based on information SMN News received, the Government of St. Maarten wants elections to be held on January 8th, 2018 while postulation day should be slated for Nov 14, 2017.